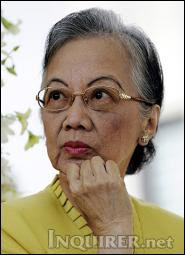 While I was in the Philippines this July, I read in the newspapers that former Philippine president Corazon Aquino was in the hospital for colon cancer. That was a pretty big deal, a big enough deal to be side-by-side with news about current president Gloria Macapagal-Arroyo's breast implants (it's true!).

On Saturday early morning, Philippines-time, Cory Aquino passed away. In terms of Philippine and Filipino American history, Aquino's passing marks a significant period, especially since a whole generation of Filipinos and Fil Ams are now in their 20s, born after the historic People Power Revolution in 1986 in which Aquino, through the massive and peaceful protests of the Filipino people, became president of the Philippines after over a decade of U.S.-funded Martial Law under Ferdinand Marcos.

A comment made by my homey Boogaleo resonated with me. Mentioning a very young generation who don't remember People Power or even Boyz II Men (facetious, but true), he raised questions about the identification this generation has with someone like Corazon Aquino. I think this deals with questions I ask in a prior post, "The Rhythm and the Rebels: Rap's Changing Political Engagement over the Generations." Basically, in the post, I ask questions about the political commitments of the hip hop generation of the 2000s, where in the 1980s the Vietnam War was still a lingering topic, and in the 1990s, the LA Riots was significant for a whole generation.

Let me take stab at addressing those questions. This moment is probably most relevant cross-generationally because many of our parents and grandparents migrated to the U.S. because of the unrest occurring in the Philippines under the Marcos regime during the 1970s and 80s. Therefore, our very identities as Fil Ams--especially our migration patterns--is shaped by the happenings in the archipelago even before a time we can remember. Cory's death therefore marks the emergence of a new generation of political identification, but again, this assertion simply raises questions of "what?" and "who?" of this younger generation.

Globally, the "what" and "who" of today is not hard to find when we examine the recent rallies in Iran, where popular street protests, repressive state violence, and accusations of voter fraud are reflective of the Philippines circa 1983-1986. What can Iranians learn from People Power in the Philippines? One thing is for sure, that is the need to pursue a strategy which takes into consideration a structural (meaning economic and infrastructural) reworking where existing relations of power are modified so as to increase a more democratic and popular engagement with national decision-making and wealth allocation. Hella Marxist-sounding, I know, but what has changed post-People Power? Sure, many things, but also many things are the same.

At least step one in People Power was achieved, which delegitimized the ruling imperialist regime. Now for Iran, the step of overthrowing the ruling president is not yet achieved, and that is a model perhaps People Power can provide. But, given the very different relations with colonialism and electorally democratic-engagement, maybe not... In both cases, however, a productive broad civic culture of progressive democratice action is being cultivated, where people can get informed and become critical about the status quo, and organize themselves.