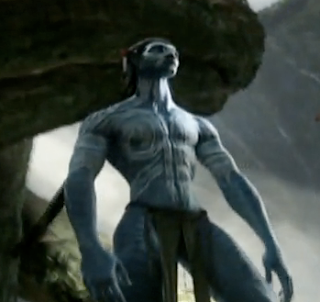 Jake Sully asks, "Did I pass?" 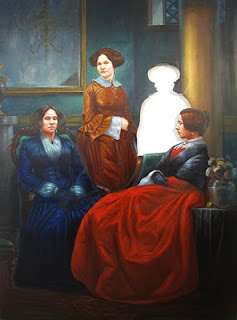 It's funny that Avatar should come out right after I read The Autobiography of an Ex-Colored Man (1912) by Jacksonville native James Weldon Johnson, a book that foregrounds the phenomenon of racial "passing" as white among blacks. Like Titus Kaphar's painting Mother's Solution (2009) in which the artist physically cuts out a figure to symbolize the narrative of a light-skinned black daughter being sent off to live among white people as a matter of survival and economic strategy, Johnson (who also wrote the Negro National Anthem) depicts the triumph, tragedy, pain, and loss for the protagonist who sheds his black identity in exchange for a comfortable, violence-free, economically mobile white lifestyle. The protagonist is kind of like a white avatar.

Avatar the movie, however, does not care much for the point of view of the non-white (I guess blue) humans/humanoids. In a flip version of a book like The Autobiography of an Ex-Colored Man, Avatar fantasizes "going native" from the uncritical point of view of the white male savior. A fun movie but hardly perfect (see here and here), Avatar speaks to a number of used (but not really useful) tropes that begs to paste Tom Cruise's face (a la The Last Samurai) onto Jake Sully's 10-foot blue, abbed-out physique.

If only the Na'vi really existed, maybe all the earth's multicolored people would really unite to colonize their ecosystem. But since they don't exist then blue will always signify the very real brown and black, non-Western Other. Buck naked beast riding beasts.

We learn from Avatar that with technology we can choose our identity and "live among the savages" if you wish, so below are a few samples of appropriate avatars for the fantasizer of the Fil Am Funk. 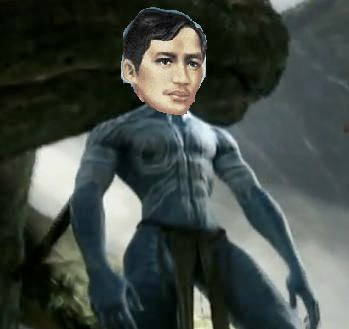 For the mestizo in you that knows both the lives of the savage and the civilized, the benighted and the enlightened, perhaps a Jose Risully will do. "Is it PCN season already?" Jose Risully asks, his abs ripped from pre-performance crunches. A Revolution deferred, until Filipinos ride atop flying dragons... 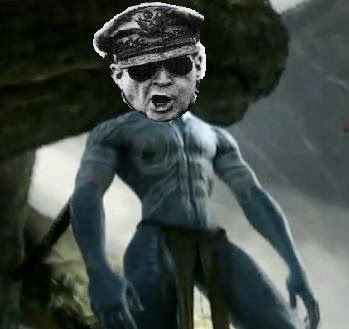 Or, to stay faithful to Avatar's great white male hero complex, maybe a more transparent MacArthur-esque embodiment will do. "Fight for me, and I will deny you your promised veterans' benefits!" Then they will build statues for you and name highways after you. 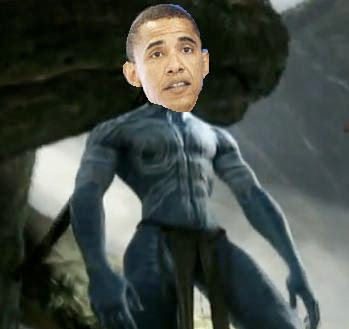 This one is for a post-racial America...reveling in its own veiled imperialism. Does Afghanistan have bulletproof hammerhead rhinos? Cold War-era U.S.-made weapons? Yes? Oh. "Philippines, we will penetrate the MILFs," JakeBama Sully, the global everyman, warns. 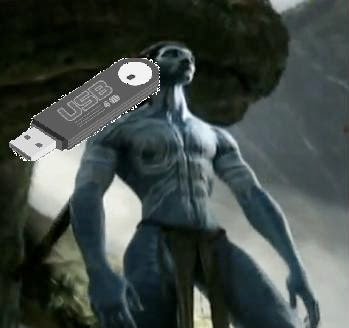 But, why ruin a pretty face? You're the master user, the supreme agent. "Plug me in!" says Jake USBully. For the internet, virtual network, wired/wireless generation, Jake's hair can freakishly copulate with your database. Plug and play...and ride your beast.

Yes, you can pass...but is it worth the loss? And more importantly, whose triumph is at stake? 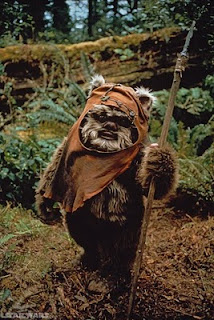 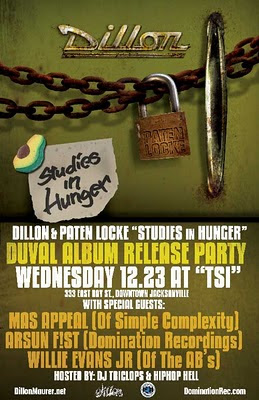 Dillon and Paten Locke- Studies in Hunger Megamix
My brotha, my fam, my hip hop comrade Dillon (here for a more complete bio) dropped a new album Studies in Hunger. Representing Jacksonville, Florida and Atlanta, Georgia, Dillon will serve you like the glutton you are with the unique flavor of hip hop in the South. It's grimy, soulful, reverent to b-boy soundscapes, and well-studied in the execution of lyricism. And Dillon has been in the midst of this independent hip hop movement, and gathering from his latest album, he may be at the forefront.

I grew up with Dillon. In fact, he was my first friend (in fourth grade foo!) when I first moved to FL from CA. It was impressive to see the dude rock the show at TSI (see flyer above) to release his second album, which boasts a big name drop from Chuck D (who Dillon apparently cooked dinner for, but that's a different story) and rhymes from Akrobatic. Dillon has raised the bar, even when his first album (when he was known by the moniker MC Intellekt) was raw to the illest extent. His punchlines, cadence, and metaphors offer fun and smart wordplay.

Dillon defines himself on his own terms, moving away from Intellekt and becoming more confident in his own self, eccentricities and all. With knocks like "Stay Relative" paying homage to his family lineage, and as always, he includes drops from his mother and sister. "The greatest story you can tell is your own," he says.

And in Studies in Hunger you can tell Dillon and Paten Locke are having fun. Hip hop should be fun man! 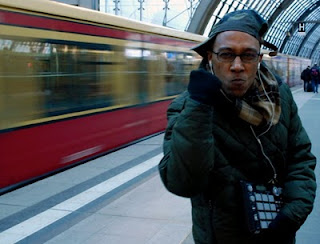 And who is Paten Locke (and here)? Also known as Therapy, Paten Locke is one of Fil Am Funk's favorite producers. A member of the legendary J-Ville-grown Asamov crew (renamed the Alias Brothers), Locke knows the ear of the b-boy and lyricist enthusiast and he also holds down mic skills with authoritative command. Locke seems to capture a hip hop culture in Florida not known by many across the nation. Not the bouncy, T-Pain, Juvenile-type Southern hip hop, Locke captures the "4-elements" hip hop flavor that many folks in J-Ville and in the South (and yes, many Filipinos in the region) have been loyal to since the early 1980s. I documented a small bit of that scene in my short doc Hip Hop Mestizaje (see top right) in my interview with Alias Brothers Pinoy member DJ Basic. Studies in Hunger also continues an interesting candid, cartoony, pot-head-like stream-of-conscious skits utilized by the Asamov crew. 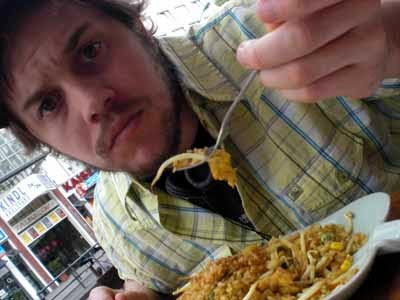 A mission of Fil Am Funk is to highlight hip hop culture from around the nation. The South has been slept on for a while. And just like Florida helped resuscitate the b-boy scene, if you're looking for quality hip hop music, Florida got what you need.

I found this 2006 article a while back, where Dillon aka Intellekt describes growing up with Pinoys and Pinays in J-Ville:

"'I learned from a young age how to stand out,' Intellekt said. He talks about his time growing up in Jacksonville, Florida, growing up as a white kid with a Filipino hip hop culture that 'totally determined where [he is] today,' cutting his teeth in talent shows to impress cute Filipino girls."

You don't see us, but we see you: Filipinos under the veil 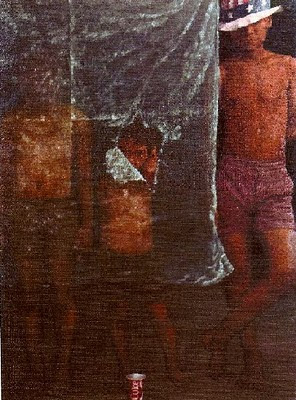 Sakun (Casualty) (1997) by Antipas Delotavo. Reprinted in Vestiges of War: The Philippine-American War and the Aftermath of an Imperial Dream, 1899-1999

Here at Fil Am Funk aka Hip Hop Lives, we love the classroom. After working as a teaching assistant for a class entitled "Asian American Popular Culture" (here is their final project...lovely), I have had time to reflect on the meaning of the term "Asian American Popular Culture." I guess one of the most illuminating things coming out of the class is students' tendencies to separate "Asian" from "American."

For example, when we talked about hip hop, some students remarked on how "Asian culture" is so different from hip hop, that Asian American rappers act like a bridge between Asian culture and (African) American culture. In other words, this can be read as Asian and Black functioning as polar opposites.

This binary is somewhat troubling. First of all, it assumes a pure origin of what is considered "Asian." That is a huge blunder, especially when colonized countries in Southeast Asia are thoroughly mixed culturally in language, art, religion, etc. and claims to a pure "Asian" culture are laughable. In fact, any claim to a true "Asian" culture (if one should be made) is kind of chauvinistic.

Dwelling on this topic, it was kind of a coincidence that I stumbled upon a question asked on Hyphen Magazine's "InterrogAsian" question and answer section. One questioner asks:

"Are Filipinos the 'black' Asians?"

Now, the meanings of this question can be taken a number of ways. Is the questioner referring to skin color? Social class? Global labor position? Cultural expressions of Filipinos and blacks?

You can read the answer Hyphen chose to give (it's kind of funny), but the question itself--one I'm sure many of us have asked or have heard asked--reveals a broader curiosity that seems to afflict the minds of more than the InterrogAsian questioner. Back to the class, then, I wonder how the topic of Asian American rappers would be looked at differently if someone also asked the question "Are Filipinos the 'black' Asians?" especially given that a silent consensus agreed Asian culture and (African) American culture were so different?

The picture above, Sakuna (Casualty), is one example of how artists portray Filipino identity and its struggle with making sense with U.S. cultural influence in the Philippines. The painting reminds me of The Roots song "Don't See Us" where Black Thought raps with an imagery reminiscent of noted African American scholar W.E.B. DuBois's "veil" metaphor:

"You Don't See Us, but we see you
You stuck on sleep, get on your P's and Q's
Cuz you will get crept, wit no discrept
You know the rep, we keep the flows in check" 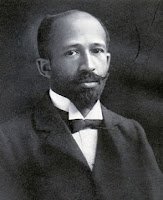 The legendary Roots crew and DuBois (image on left) suggest the "double consciousness" of blacks in the United States: they live under a "veil" in which they see and know (white) American culture and people, but yet because of the mainstream marginalization of black life, people on the outside get an obscured view of black people. DuBois argues that blacks in the U.S. know at least two lives: "mainstream" American life and black life, thus the double consciousness under the veil.

Sakuna (Casualty) paints the same metaphor for Filipinos with a literal veil covering two Filipino boys and an American flag-themed hat obscuring the face of another. You don't see them, but they see you. For the artist, the 1899 moment is one not to be forgotten.

When we look to Asia, just how "other" is Asia from the white (and black) West?

In the field of Asian culture, where do Filipinos position themselves? (We gotta go beyond lumpia shanghai and pancit canton!)

For Filipinos and Filipino Americans making music and culture, even under the veil they keep the "flows in check," hittin you with fluency in all kinds of P's and Q's. If you slept, guaranteed, you will get crept.