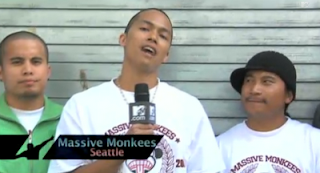 Is that Seattle's very own Massive Monkees on the crew list of America's Best Dance Crew Season 4? Yes!

You can watch their ABDC audition here.

And you can watch their interview, along with Fr3sh from Jersey (are they FilAm?) here.

A description of the crew from the MTV site:
"MASSIVE MONKEES (Seattle, WA) – This Seattle crew have grinded their way through national and international competition at the highest level over the past five years. They have won a number of prestigious titles including B-boy Summit 2000 and the World B-boy Championships at Wembley Arena in London, England. The Monkees are actively involved in their community, working at local centers with children, coaching child sports and teaching b-boy classes. They even have their own holiday, as April 26th was dubbed Seattle’s official Massive Monkees Day in 2004. With this much talent and personality, they could be next in the line of b-boy crews to walk away with the $100,000 prize."

Will b-boys take the ABDC prize once again?

Will Pinoys continue to make noise?

Is ABDC relevant to the b-boy community, given these big name b-boy and poppin crews are gettin they shine on this show?