Travel writer Pico Iyer once wrote about Filipinos' uncanny ability to be great imitators.  What is implied is that Filipinos do not have an original culture, and as such their music in contemporary times is sometimes regarded as xerox-copies of American music.  Hence the perpetual struggle for Filipino artists in the Philippines to carve a viable niche of "Original Pinoy Music" to sell to their audiences. 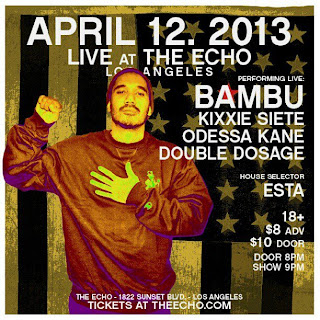 But, what happens when Filipino American artists' audience move beyond a predominantly Filipino American audience?  On Friday night, a whole posse of Filipino American male emcees (Double Dosage, Kixxie Siete, Odessa Kane, and Bambu) rocked a sold-out crowd at The Echo in Los Angeles.  Sure, there was the usual Filipino American fans, but I would be confident in saying that the house was loaded with young Chicanos and Latinos who may have outnumbered the Pinoys.  And just like the Pinoys, these folks were mouthing the lyrics of the performers on stage and pumping their fists just as high.

Kixxie's Hawthorne/South Bay fanbase, Odessa Kane's Filipino/Mexicano-centered lyrics, and Bambu's Soul Assassins affiliation (the crew of Cypress Hill) can certainly attribute to the very distinctly Los Angeles hip hop demographic.  At one point, Bambu yelled out: "We were all colonized by the same people anyway!"

If you patronize the music of the most prominent Fil Am emcees, you are aware that their material has unmistakeable Filipino-relevant material--ranging from leftist Philippine nationalism, indigenous spirituality, critiques of colonization, to lifestyle and conditions of Filipinos living in the U.S. (and globally).  In all of his albums, Bambu drops Tagalog lyrics in a few of his songs.  As well, Fil Am emcees address a range of topics that are not Filipino specific and tend to cross borders, especially when it comes to people of color politics such as gentrification, critiques of militarization, police brutality, Third World feminism, and working/(lumpen)proletariat class angst.

And, for some reason (even though I am not surprised), I am curious as to the meanings of non-Filipinos who are drawn towards/indulge in/recite/embrace Filipino American-accentuated music and culture.  What happens when Filipinos have a non-Filipino audience?  Are they attuned to the Filipino-related lyrics?  Do they identify with Filipinos?  Do they hang out with Filipinos?  If not, how are Filipinos relevant in their lives?  Where do Filipinos appear in their imagination within a field of racial and ethnic power?  How are Filipinos made legible to the non-Filipino cultural imagination aside from this music?

Or maybe that's it: Filipino American artists have a certain draw (power) because they are so flexible.  They can somehow touch the souls of people of many backgrounds.

And that seems to be the ongoing trope:  Filipinos somehow appear nowhere and yet appear for everyone at once.  A Filipino is invisible in the larger schema of our cultural imagination, yet she/he is also right there all along.

Like famous Manila tour guide/activist/performer Carlos Celdran says: "Filipinos have little unique about them.  And that's precisely what makes them so unique!"

Being unique yet broadly resonant seems to be a formula working for the fast-growing scene of Filipino American artists in hip hop.
---