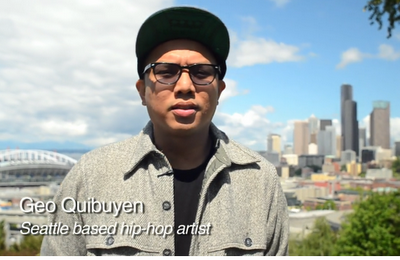 Asked to write a Seattle Times guest column in response to last month's deadly shooting spree in Seattle's University District, Blue Scholar's Prometheus Brown wrote a song instead.  He wrote "May Day" to address the less-acknowledged and more pervasive violence in the city. (Lyrics and media below)

A media spectacle erupted around the May shootings in a city that, according to a ABC news clip, "prides itself as one of the safest big cities in America."

Stirring a firestorm of internet controversy, Pro Brown's "May Day" attempts to debunk the myth of Seattle's"safe" reputation. Do we really know whats going on in "grimier environments," where shootings and other acts of violence happen frequently?


Pro Brown's song is dense with layers of references and images (Spike Lee's provocative 1989 movie "Do the Right Thing" reveals Brown's generational sensibilities), but is clear in its indictment of popular media's tendency to sensationalize violence in so-called "safe" urban areas, when violence in the hood is often left ignored. It seems there exists a double standard: some lives are worth more than others.

Pro Brown doesn't valorize the hood or champion its condition.  Instead, "May Day" laments the situation that folks have no choice but to live in and criticizes the expectations made by city officials and commentators that marginalized people must "act right" as "proper citizens" in order to be fully enfranchised. Brown says, "They saying that you gotta act right if you wanna have rights, but what if you were born into a wrong situation?"

Sadly, violence has become normalized in certain parts of town. "It’s something that’s been happening for a long time in the south end." Certainly bounded within the geography of Seattle's metropolis, the song illustrates that the south end is not fully enfranchised. Sure, there is "panic" in Seattle, but there is also an indifference to people's lives in abject areas. Perhaps the disavowal of the conditions of the latter is necessary in creating the mythology and materiality of a "safe" Seattle. 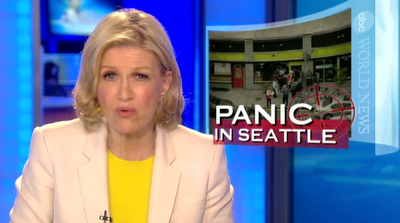 Prometheus also alludes to the danger impacting Philippine journalists who for some time have been "disappeared" due to their investigations of the Philippine military and government.  He urges us to see the links between the dangers confronted by ordinary citizens in the lesser-respected parts of town and that of Philippine journalists who testify to injustices. Both bear witness, and both are vulnerable to death due to state-complied violence.

What happens when our collective consciousness normalizes violence, especially when it is targeted toward groups that are stripped of voice?

How long does it take for our collective consciousness to "wake up" from the numbness, indifference, or ignorance we have towards the chronic premature death of black and brown people?  How many more Trayvon Martins or South Side Chicago shootings?

Prometheus does not claim to have the answers, but he says "neither does a person who practices double standards."

"May Day" is concise, smart, subversive, and should prompt us to rethink what is being normalized and provoke us to change those grievous conditions.

Never heard of this, city getting murderous —
occupation dangerous like Philippine journalists.
Crazy and deranged they describe him in the same pages
that would call him terrorist, if not for the melanin deficiency.

Gang problem bigger than just juvenile delinquency.
Gangs is survival if environments is grimy.
To begin with — speaking of which, let’s be consistent —
Today is called a tragedy, yesterday a statistic.

I’m listening, before I ever speak upon insisting.
My name is young Prometheus and this is my opinion:
Watch “The Interrupters,” see ordinary civilians
can police themselves before they have to call police for help.

At least a little space to breathe, if you believe all violence
is abhorrent to your being, then why you oversee it?
If the killer wears a uniform but if the killer’s me,
it’s normal if the victim also looks like me.

Can’t lie, I know the music can be influential,
but not as influential as desperation. They saying
that you gotta act right if you wanna have rights,
but what if you were born into a wrong situation?

Moral relativity — that passive aggressive city stuff —
becoming history quicker than you can blink at me.
Rule 1: Protect yourself at all times.
Rule 2: Always end but never start a fight.

Came up in the era of the hand-to-hand scrapping
‘til the drugs happened, now it’s bloodshed at transactions.
I’m calling time out like Samuel L. Jackson
playing DJ Love Daddy with the African medallion.

Tryin’a do the right thing. I don’t have the answers,
but neither does a person who practices double standards.
If every death’s a tragedy then join us when we’re chanting,
and not just when we’re singing and dancing. Too many

shots fired in the south end, nobody cares.
Shots fired in the north end, everybody scared.
Nothing they can do for us that we can’t do ourselves.
Point the finger at the mirror instead of somebody else.