Who we? We Filipinos: Jacksonville Pinay/Pinoys represent (Part II) 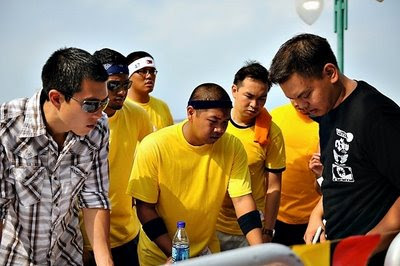 Jacksonville's Filipino Pride Day behind the scenes crew. Jo Alvaro center in yellow, David Garcia in black. Photo credit: Jeff Enriquez.
This is part II of reflections on Jacksonville's first ever Filipino Pride Day (FPD), which occurred on June 20th. Below, I am pleased to present some very special guest interviews. Unfortunately, I was not able to attend FPD, so I asked a few questions to some bruthas who worked in the trenches of FPD--they experienced the sweat, grit, and grime, but also the smiles, joys, and satisfactions of this huge community project. I grew up with these fooz, so I trust and respect their unique perspectives and reflections.

Below, David and Jo comment on the Filipino community in Jacksonville, their immersion in the community, their involvement in FPD, the future of FPD, and hip hop! Good job my brovas!

I was born and raised in Jacksonville, Florida. I got involved with Filipino Pride Day through a family friend, Audrey Aviles. I got assigned the task of “Stage Director.” I am so happy with the turnout, the volunteers, and the togetherness. I couldn’t ask for more.

I’ve always hung out with Filipinos growing up. When I went to college at the University of Florida, I got involved with the Filipino Student Association. FSA held events and meetings and of course parties that were always packed. It didn’t matter if you were Filipino or not, people loved going to FSA events. Some of the big events were Def Talent Jam and Barrio Fiesta. DTJ has maintained its hype throughout Florida and the southeast for close to 20 years (shoutout to Walter!). It is a dance/band/vocal competition pulling talent from all over the South. I was lucky to not only help plan it during my college years, but I also given the opportunity to host it in 2003 (DTJ: Royal Rumble).

The Filipino community in Jacksonville is strong in numbers, spread out, and consists of multiple groups/associations/clubs/crews/barkada. This is why FPD was so successful. ALL of the groups got together and did something as one. In all of my 27 years living in Jacksonville, I haven’t seen something that beautiful in Jacksonville. We Filipinos, Inc. (led by Rosabel Hill), the nonprofit organization that put the event together, moved mountains. Folks from high school, college, young adult, to senior citizens pulled together and found this common bond. Parents got their kids while kids got their parents involved and it was sick (meaning good)! Being involved with this event made me see how Filipinos are intertwined with different levels of the community.

FPD has so many people not only thinking about next year-June 12 (from what I hear). But thinking about how we can bring our people together. Its creating an answer for kids who ask, “Who am I?” Something like this will change Jacksonville. It will change how people see Filipinos. More importantly, I hope fellow Filipinos will appreciate each other more. It will encourage other cultures to do the same. Jacksonville isn’t a place where culture thrives. But it will be. Volunteering and working with people you never worked with before, and seeing what you can create or be a part of is an amazing feeling.

Everybody was at FPD. From kids running though the fountain, to lolas with their fan in the shade, families with teenagers. People came from Gainesville, Virginia, Tampa, Orlando, and Georgia. The crowd was definitely mostly Filipino, but white, black, Hispanic folks came thru as well. It didn’t matter if you were preppy, thugged out, urban, or wearing a duster. People were constantly flowing in and out.

I’m still excited about FPD two days later. For a first event, the bar is extremely high for next year. From an audience perspective, I haven’t heard one negative comment. I had an awesome team of close friends and folks I just met. The emcees keep everything moving very well and their energy was up until the end. I don’t know how they did it. The performances were high quality. DUUUVAL has got some talent, son!

Vanessa of Systematics gettin funky
Hip hop is strong in Jacksonville. Systematics is an up and coming crew that has the potential to be on ABDC. Believe me. They would rip it up. Crème de la Crème always brings it. They are the reigning champs of Def Talent Jam. Rap groups Ultimatoz and 4Pnoize represented performing songs in Tagalog. Most people cannot make it look or sound as good as these guys did. People that didn’t know what they were saying were bobbing their heads. They made me proud!

FPD will be around next year. Chismis has it that it may be a 2 day event. Who knows? I think Jacksonville and its surrounding areas have so much talent that it has potential to be as big as Los Angeles’ Festival of Philippine Arts and Culture. I want to thank all the stage hands and volunteers! You made this event a success! 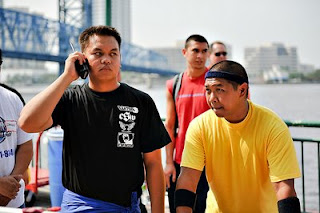 I first got involved in Filipino Pride Day when I was approached by Sherwin Estanislao of 24VII Entertainment and World Martial Arts to participate in on-stage performances. After some thought, I opted to help behind the scenes since I had no training in Filipino Martial Arts (that and I’m fat and don’t wanna take my shirt off in front of a crowd lol). I met with the FPD staff for the first meeting at Fickle Pickle and went from there. Also, I visited a close friend of mine in L.A. who encouraged me further to join in and help out with FPD. After seeing the folks and culture on the Westcoast, I was inspired.

Sherwin Estanislao vending for 24 VII Entertainment
I was born in VA Beach, VA and moved to Jacksonville, FL in 1991. I can practically call myself a Jacksonville native, being here a good 19 years. When we moved to Jacksonville, FL the Filipino community was very far from what we were used to compared to Va Beach, but we were pleasantly surprised at how many Filipino families were in our first neighborhood we moved into (Monument Oaks). The area we are located in JAX is a lot of Navy families, due to the close proximity of Naval Station Mayport.

The Filipino Community in JAX has long been spread apart, and in some cases completely disconnected, due to various factors. (Large city, different class, different origins, etc.) From my experiences the community is split up mostly by location … ex: Westside, Orange Park, Mandarin, Southside/ Arlington, Beaches/ Mayport, and now the ever-growing Northside community.

Although there is a large number of Filipino families in Jacksonville, I have always sensed a separation from these sides, to some extent or another. I think an event like FPD is critical to uniting the Filipino community in Jacksonville. Having participated in "Fil Am Friendship Day" in VA Beach when I was younger, the results are wide spread in bringing Filipinos of all different provinces, classes, sides of town, in one meeting place to enjoy in the celebration of their culture. It is especially important to have an event like this, in a place like the Deep South, where it is rare to see Asian influences, let alone Filipino culture, anywhere.

The division of the Filipino community I spoke of earlier, seemed to diminish when the event went on. We weren't Southsiders or Westsiders anymore…we were all Filipinos who lived in Jacksonville enjoying a day together…celebrating all things Filipino. FPD was truly a break through and a positive step forward, not only for the Fil Am community here, but for the city as a whole.

For me, I paid attention especially to the generation that came here in the late 80's/ early 90's and moved from places like LA, Va Beach, or even straight from the Philippines, those people who grew up in a Jacksonville where there were no events like this but kept their heads up in hard times of finding their own identity. I could only think of how proud they were standing there with their children in their arms and watching a Filipino on stage at the Jacksonville Landing.

For being the first ever event of its kind in North Florida, the showing was huge with head counts in the 10,000s at peak time (6pm count by Landing personnel). The vendors were selling, the public was buying, the performers were rocking, and the Landing was bustling with families and people of all types.

As for the hip hop acts, my cousin Vanessa Bautista rocked it with her crew Systematic but unfortunately I was not there for her performance. I did catch 4 Pnoiz do their thing which was very cool.

I am more of a Bboy, and there was talk of bringing linoleum to the event later on in the night for an open cipher in front of the stage BUT the music after the performances was mostly of the Electric Slide variety and Todo Todo.

I would just like to thank those who stepped forward and made this event possible, from the volunteers, to the sponsors, to the groups who performed locally and from out of state. Every element making this event happen was so important and made it a success.

Click here to read PART I of this topic
| More
Posted by MV at 9:11 PM

the pride is heartfelt across the world from a fellow jax native!

so many ways to dissect this event from afar, who finally landed in the Jacksonville Landing? WE did!

For more city context, the Jax Landing is the closest thing we got to a downtown premier scene, and its the spot where all the major events from New Years & 4th of July where the whole city gathers, and for the Fil Am community to claim this city staple, 10,000-strong, speaks worlds beyond our experiences growing up.

Props to all the organizers who've envisioned, planned and sweat for this event. I hope this 1st victory translates to many more community collaborations.

As far as community development, it would be interesting to follow the main organization that put it together, We Filipinos, Inc. Were they really the head organizers? This is an interesting look at our community assets (founders being a registered nurse, an accountant, & business consultant) identifying a community need such as uninsured healthcare and executing an event to fundraise (1st FDP) for those needs.

I hope the org continues to pursue a clear, inclusive, transparent agenda in their projects as it looks like it has potential to pursue/fund many community development projects in Jax with its first priority being healthcare. Heck, in this immigrant climate, it's a MAJOR grassroots victory to help recent immigrants and the uninsured with their health needs which Legacy of Care targets).

It's a new day for Duuuuuuuuuuuval.

oh yeah for more context of downtown Jacksonville Landing in the Dirty South:

I remember 9-yrs ago (dam) gettin together with my HS breakin crew @ the 4th of July celebration, 2000.

We ran into a crew from Orange Park (shouts to Wade!) in the crowd and we started wreckin it, the hype was thicker than the humidity! I started to uprock and 5-seconds later I was in an armlock with a white cop. There must have been 2 other cops to shut down the circle.

They kicked all of us (majority of Filipino & Black kids) out of the Landing. All I remember shouting was "it's Independence day! and we ain't freee!"

that's the Jax Landing I remember, no hiphop, no people of color like us folk.

With events like Filipino Pride Day, I feel like we got some of our dignity back. That's pride.