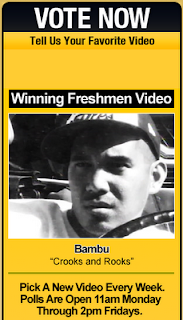 Just want to send a quick congrats to Bambu, Patricio Ginelsa, AJ Calomay, and the rest of the "Crooks and Rooks" crew for winning the mtvU "The Freshmen" weekly video contest. I guess we'll be seeing this hot music video on steady rotation on mtvU this week. What happened to the music on regular MTV? Well, looks like mtvU, although not exactly perfect, is providing an outlet for indepedent artists and filmmakers, giving us new, local music that MTV used to provide. Outsource that shit... hey, I guess whatever works.

Bambu did an effective reaching out campaign through email blasts and website posts. This shows the extensiveness of his network, and perhaps the formidability of a Filipino hip hop generation? That's whats up. I even got my students to vote, so hopefully that helped a little.

If you haven't watched the "Crooks and Rooks" video, then you should peep it soon. In the video, Bam flashbacks to the early 1990s in Los Angeles, giving a glimpse into the drug trade and ganglife of young Filipinos in the area. This is an often overlooked part of Fil Am history, for one because many people who don't come from these parts are understandably disassociated from that history. And two, perhaps we tend to delegitimate a very real (and integral) part of the Fil Am experience for all of its violent and negative connotations. But gang culture (and its derivatives--"party crews," and so on) along with hip hop culture are woven threads in the fabric of our history.

Would hip hop among Fil Ams be the same without gangs?

Some might remember John Castro's (of The Debut) mockumentary "Diary of a Gangsta Sucka", which is a satirical film about the glorification of gang culture among "safe" suburban youth. Not just isolated in the inner city "hood," as many of us know, ganglife also thrived in supposedly pristine suburbs (in whatever region of the U.S.), signifying the role of sociality of gang culture among young Fil Ams. Lakan and Bangele talk more about that, and Bambu definitely speaks about the productive organizing structure of gangs.