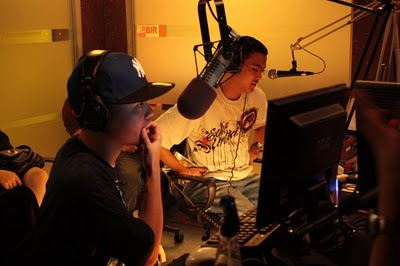 Ridin’ out in Metro Manila

On a drizzly, humid July afternoon I squeeze into an overflowing train headed for Las Piñas, a city in southern Metro Manila. I hop from the train onto the Philippines’ most ubiquitous forms of transportation, the jeepney, a functioning relic of the United States military ostentatiously stylized with distinct Filipino flavor—bright paint, shiny chrome, and customized body kits. Like the other commuters, I cover my mouth and nose with a handkerchief as we battle the Metro’s pollution and traffic.

I am on my way to interview the Turbulence Productions crew, a small, independent group of emcees, beat producers, and entrepreneurs who rank as one of the most respected hip hop crews in the Philippines.

As someone who has been immersed in hip hop and who documents Filipino American involvement in the cultural cipher, I, like many other Filipino Americans, carried my own biases about hip hop in the Philippines. I believed because the Philippines is a poor country whose people are obsessed with mimicking catchy American pop songs, the quality of hip hop in the country must be sub-par.

I had it all twisted.