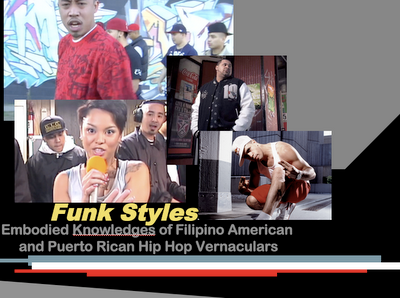 I'm presenting this at a conference in Austin, Texas on Thursday. CJ of Deep Foundation, Hopie Spitshard, Joell Ortiz, and Crazy Legs bless us with the slide #1. Hee haw!
| More
Posted by MV at 1:00 AM

MONKEYfightingSTYLE said...
This comment has been removed by the author.
April 6, 2010 at 1:47 PM

Good points taken. Some additional (possible) strategies: perhaps mobilize internally with POC's who are already working for CBS, ABC, NBC, etc. who can more than likely feed some insider information. In addition, who is the producer who allowed this to air? Who is the head writer? Who is A.Carolla's agent? These are all people who need to take responsibility. Also, many times when dialogue like this is greenlit, there are NO POC's on the production team, writing team, etc. All it takes is for ONE person on the creative team (associate producer, hell, even a PA) to say "That's not cool," for them to pull it before it airs. CBS states (on their "Diversity Initiatives") that "CBS Corporation, and its divisions are committed to building an environment that values diversity throughout the corporation and in its business practices."
If a campaign is mobilized internally at CBS simultaneously while organizing outside, this could expedite the results.

We can rally all we want, but if we don't have people on the inside constantly educating and reminding the head honchos (in media) of what content will ultimately lose huge audiences, then unfortunately behavior like this will continue.