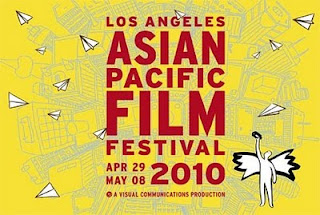 WELCOME TO AIRLINE DOCU-MUST-SEE!
TRT: 102 min.
Let's fly. This versatile collection of gems shed light on artists, business folk and everyday people who rise far above cultural and societal barriers. Coast through different parts of the world and learn about what exactly makes these individuals heroes on this place
called earth.
*Rochelle Lozada

STORY OF A BUSINESSWOMAN
(United States, 2009) Dir.: Mikiko Sasaki
Michiko Nakamura, 28, is one of a few businesswomen in Morioka City, a suburb located 300 miles North of Tokyo. She owns Realtor ALIVE, and her business has been slowly but steadily growing. With no female role model in her town, Michiko finds her way to survive in the business by learning how the 'man's world' works. She is given an opportunity to become the first female mentor to teach a series of workshops at a local business conference, where she is challenged to assimilate into the male-dominated Japanese business world, where sexism is still the norm.
Video, 21 min., color, documentary, in Japanese w/ E.S.

LOVE IS WORTH IT
(United States, 2009) Dir.: Chuck Byun
1st. Lt. Dan Choi, an Iraq combat veteran and Arabic linguist, came out of the closet on national television in March 2009. He was discharged a month later. Since then, he has become a prominent activist in the fight to overturn the military's Don't Ask Don't Tell policy. This short film documents a day in the life of a man who has been described as the face of a movement.
Video, 7 min., color, documentary

SANSEI
(United States, 2009) Dir.: Emi Takeda
A meditation on the possibility of compatibility between a Brazilian woman and her Japanese grandfather.
Video, 15 min., color, documentary

LYRICAL EMPIRE: HIP HOP IN METRO MANILA
(United States, 2010) Dir.: Mark Villegas
Take a glimpse into the lives of hip hop artists from Metro Manila, in a country where hip hop culture is under constant scrutiny from a skeptical public. What will it take for these artists to prove their skills? Will hip hop become big in the Philippines or will it be forever discarded as 'jologs,' underclass, and uncultured? These hardworking hip hop heads show you the passion and style they bring to the game where lyrical boundaries blur and innovation is prized.
Video, 20 min., color, documentary

BORN SWEET
(Cambodia, 2010) Dir.: Cynthia Wade
Despite being only fifteen years old, Vinh Voeurn has accepted his destiny - to be sick for the rest of life with incurable arsenic poisoning. He longs to fall in love with a girl with long, smooth hair. He fantasizes about becoming a karaoke star, winning the affections of adoring fans. But his body is terribly scarred by illness and there is a good chance the arsenic will soon take his life
like the girl who once lived across the road. Vinh spends his days in his remote Cambodian village tending the cows and escaping into song with his family's car battery powered karaoke machine. He worries he will never marry and live the life he wants for himself. A chance to be in a karaoke video about the dangers of arsenic allows Vinh to wonder if he truly knows his destiny.
Video, 25 min., color, documentary

so, you ARE a writer.
congrats on your flick again!
hope you made it back to the best coast safely...