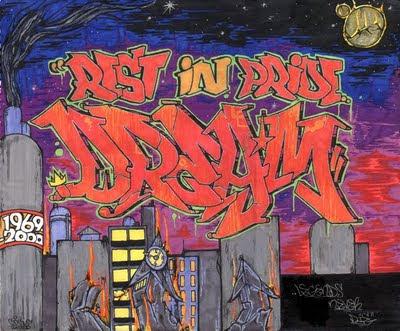 Else1 dedicates a sketchbook piece to Dream
A few weekends back I had the privilege of attending the 11th Annual Mighty 4 in Oakland. Representin at the event were Lil John and Vogue 1, two Pinoy dudes I interviewed about 3 years ago at another Mighty 4 event.

Lil John is the brother of Mike Dream. Dream was a Pinoy brother from East Oakland who passed in 2000. Dream had been creating graffiti art since the early 1980s and his style became famous worldwide. The graff game is indebted to his creativity and genious. The hip hop world and socially-conscious folks miss his poignant political messages. This Artist Spotlight is dedicated to Dream, a beloved figure and pioneer in hip hop who stayed loyal to the culture and continues to inspire folks. It would be a huge oversight to not mention Mike Dream when discussing Filipinos in hip hop.

Above are a number of interviews I did for my short documentary, Hip Hop Mestizaje. I created this Mike Dream addendum to the film because so many of my interviewees gave shout outs to Dream as an influential Filipino brother in the hip hop hustle. Here are the interviewees in order of appearance: Geologic (Blue Scholars), Davey D (Davey D's Hip Hop Corner), Paulskee (Mighty 4/Rock Force/Zulu Nation), Basic (The Alias Brothers), Lil John (TDK), and Vogue 1 (TDK). Youtube has an abundance of Mike Dream videos. This one has a good interview with the brotha. And apparently he was supposed to be in a Converse commercial.

To learn more about him, here is an excerpt from Dream's article, "Writing is My Life":

WRITING IS MY LIFE
by MIKE DREAM

"Writing is my life. I am a graffiti writer. Whatever people say about the terminology, I write. I've been writing since somewhere around '83...

I went through a consciousness phase in the writing, realizing that 'art for art's sake' was weak and that there was power in the message. I began to understand the roots of my own culture. My Filipino heritage taught me about the struggles and sacrifices of my people for equality in this country, opening my eyes to the racism that surrounds our lives, and all of our brothers and sisters of color. My pieces started to have more content and substance..."
CONTINUE READING...