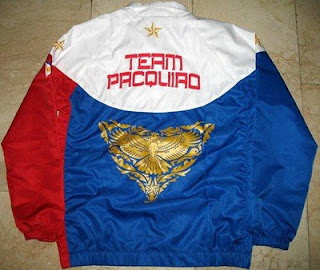 After a recent controversial win over his long-time foe Juan Manuel Marquez and a looming Floyd Mayweather showdown closer than ever (Money announced today a proposed May 5, 2012 fight date), Manny Pacquiao's notoriety shows no sign of waning, even though critics argue that his fighting ability is on the decline. As a congressman in Sarangani Province, the globally popular Filipino icon has had to juggle between his political responsibilities and his sports career.  Was this juggling the cause of his uncompelling and indecisive win over Marquez?


Filipinos in the U.S. and around the world cheered for their champ, with some making the holy pilgrimage to Las Vegas to simply be within Pacman's orbit.  And for Filipinos in the Philippines, waking up early and missing holy mass was a legitimate excuse for the sake of a Pacquiao fight.  The whole world watches when the athlete once featured in Time Magazine's "most influential people" list steps in the ring.


And the whole world also wears him.


Nike's "Team Pacquiao" brand has become recognizable to many non-Filipinos, with the Philippine flag colors becoming synonymous with the boxer.  For sure, Pacquiao gear (and also Philippine flag-themed gear) has set its place at the table of Filipino American fashion sensibilities.

But do the meanings of Pacquiao's image, especially through Pacman fashion, remain the same for all Filipinos around the world?


I was surprised to learn that in the Philippines, many Filipinos regard Pacquiao as symbolizing "jologs," which roughly translates to "ghetto" or "kitsch." Yes, the heroic Filipino icon represents more dimensions than mass admiration.  But that's just it.  "Jologs" operates as a disparaging marker for people who are seen as mindless and naive (think people who wear too much Steelers or Lakers paraphernalia).  Hip hop too in the Philippines, as I try to show in my film Lyrical Empire: Hip Hop in Metro Manila (also viewable in the right column), represents for a certain segment of Filipinos a supposedly "uneducated" "jologs" spirit.


For Filipino Americans, Pacquiao is an emblem of Filipino pride, identity, masculinity, and power. Even for non-Filipinos, as Davey D argues, Pacquiao has become a "People's Champion" because of his pro-common people values.


Certainly a major explanation is class (and the specter of class aspirations).  Since Nike's takeover of Pacquiao merchandise, it has been much more difficult for poorer people in the Philippines to buy expensive Nike-brand Pacman shirts, hence the noticeable (and ironic) lack of Pacquiao clothing among the masa in the islands.  But the middle classes aren't sporting it either.  The real market, it seems, are those Filipinos "out there" across the globe who are unaware of the cultural politics in the mother land, who are oblivious to "baduy," "bakya," or "jologs"--epithets that describe the cultural tastes of the masa.


When Pacquiao makes his post-fight interviews, we might flinch and chuckle.  In the Philippines, the "jologs"-induced cringing moment could not be stronger.  As a major political figure who has little education, limited English (compared to more-educated citizens), and a manic masa following, Pacquiao exemplifies at best an ambivalent figure for many Filipinos in the Philippines, especially among those who have been critiquing civil society and are engaged in the political process, a process in which the champ has quickly assumed a degree of leverage and power (think Erap).


When Pacquiao sings Karaoke songs on Jimmy Kimmel Live, many Filipinos in the diaspora embrace him for his levity and charm.  Without the "jologs" factor in their vocabulary of Filipino cultural politics, Manny remains harmless.  He might seem as simple as the poor people who sing on variety shows like Wowowee, but he is excused for his pronunciation and grammar "errors" because he is a winner--a masculine embodiment of Philippine nationhood.

But in the Philippines, the complex and often contradictory cultural politics of everyday life manifests itself when the boxer-legislator appears on the TV screen.  In a poor country, "being" Filipino means much more than wearing the three colors.  When Pacquiao fights his opponents in the ring while also fighting key legislation such as the Reproductive Health bill, the cultural consciousnesses of Filipinos around the world become strangers.


Our project Empire of Funk: Filipino Americans in the Cipher of Hip Hop is continuing to grow. Please check out this compelling article written by Cerritos-native Cheryl Cambay. It time stamps a very critical moment in the development of Filipino American culture in the 1980s and early 1990s. Great work, Cheryl!

Also, as a reminder, we are taking submissions for poetry, fiction, photography, and visual art for publication on the website until November 28th. Visit our website for more information.

"...I remember rehearsals well – we’d end up at someone’s house and practice in the garages, front yard or the street. At one of girls’ houses - without the mirrors like you see in dance studios, the way we viewed our progress was literally to video tape rehearsals on a camera that was propped up on a tripod and view the footage and make adjustments, corrections, blocking as needed. When we rehearsed at Emil’s house I remember his mother had a glass-mirrored closet that we used to rehearse in front of and it was small so you couldn’t see the whole group from the reflection! Oh the joy of practices at our parents’ houses after school! And whenever we needed to rehearse or perform at a gig we literally had to call each other at home (no cell phones or email) or page each other to make sure we scheduled rehearsals and made ourselves available for the gigs we were asked to perform at. We also went shopping for performance outfits, which consisted throughout the years of overalls, paisley shirts, timberland boots, embroidered hats, parachute pants – what we considered cool and hip at the time!..." [continue]