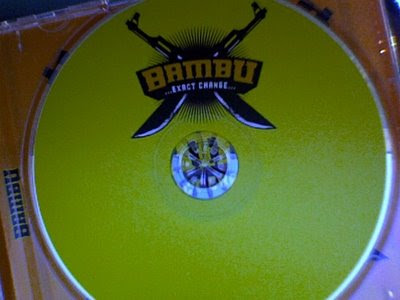 Whew...Is hip hop dead? In a coma? Underfed? Well, whatever the case may be, hip hop music is thriving, bold, brave, and well-fed in Bambu's Exact Change album. FOBBDeep spells out some of the meanings of the phrase "Exact Change," appropriate during this election season.

I just picked it up at the UC Irvine Kababayan First Gen last week (thanks Kat!), and only now listened to the whole album in its entirety. Whew... its not only what hip hop needs, its what I need right now to stay spiritually sane (naw mean?). Exact Change is intelligent, street-smart, soulful, well-produced, while staying faithful to Bambu's messages of social justice in regards to Filipino, people of color, and women's lives. 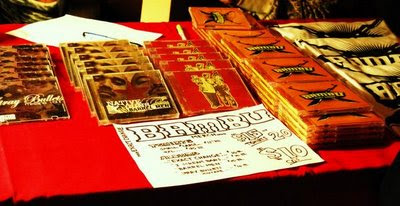 In the liner notes, Bambu writes he wanted the album to be "a little more headphone friendly" and "wanted the lyrics to be a little more introspective," and this is what he gives you. Looking back, I think Bambu's last album I Scream Bars for the Children was more meditative than introspective ("Life in Rewind" or "Jeepney" anyone?). Bam bares his soul in this new joint, especially in regards to his growing family and the necessary self-transformation (check out "Seven Months"). 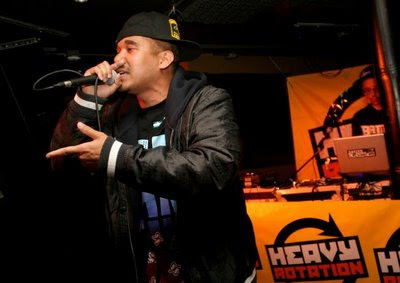 For many Filipino/a Americans, I think this album may be a spiritual journey. Bam speaks to a variety of issues that many of us "feel" and he puts it in words.

In "Misused," Bam lays out the crooked cultural politics when it comes to church. Why is Jesus always shown as white? And why are we--as brown Filipinos--not questioning this consciously-constructed mythology?


"...And when I'm dead and gone
It's the same ole song
I'll walk right out of heaven
If it's primarily blonde, and
Blue eyes lies since I was born
And now my son gone have to deal with
People sayin he wrong
For not believing what they believe
He livin in sin
Because he'll never kneel down and pray
To that color skin, no.

I used to sit in church and look at the stained glass
And wonder why none of them look like me.
You know what I'm saying? And I just don't want
My son to go through that shit."

Bam's monologues (the non-rapped, spoken words) are very instructive. Check out the song "Exact Change" for the troof:

"So, to create change and to make a real shift in our society, it's not as difficult as you think. You know what I'm sayin? The process might be slower than you like, but once those series of events begin, especially with yourself, you'll see that the individual becomes a group of individuals. And that group creates the climate for social change. You feel me?

So, you gotta educate yourself. Organize yourself. Recognize that you are not simply one person, but a bunch of strings bound into a rope, you know what I'm sayin? And you could pull yourself out this shit."

Exact change. Make change...change that matters. Start with yourself. Then get on that bus yall.
| More
Posted by MV at 3:37 PM 0 comments 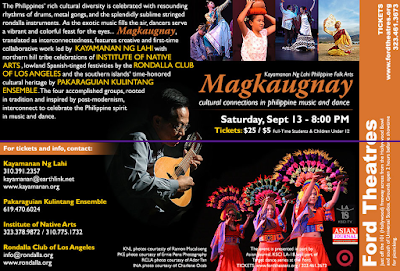 Dressed in jeans and jamming to an I-Pod, the Pinay dancer struts to the center of the stage, whipping her long hair to the sounds of "Bebot" and Jocelyn Enriquez. Then, all of a sudden, the headphones quit working, and the gentle sounds of metal kulintang gongs emerge. The spotlight reveals a varied collection of musicians in the rear of the stage. The colorfully-dressed gong players increase the aggressiveness of the percussion when the spotlight then reveals loin-clothed musicians pouncing on animal-skinned drums. Soon enough, the graceful sounds stringed instruments makes an entrance, and the rondalla musicians appear, magically intertwining their guitar sounds with the other percussive instruments. The staccato and harmony of the music appears almost chaotic, but it somehow makes sense. It works. 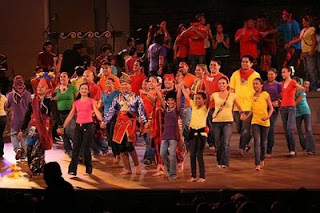 Photo credit: Dixon Perey. The Pinay dancer is in pink to the left. You see the visual color variety, can you imagine the way the music sounded?

Putting down her I-Pod, the Pinay dancer revels in the sonic madness, moving rhythmically across the floor and vibin with a variety of Filipinos dressed in traditional garb who come down from the rear.

This opening scene sets up the "post-modernism" and "interconnection" that describes "the Philippine spirit in music and dance" in the production "Magkaugnay" put on by the Kayamanan ng Lahi Philippine Folk Arts (KNL) organization featured at the Ford Amphitheatre on Saturday, September 13th. 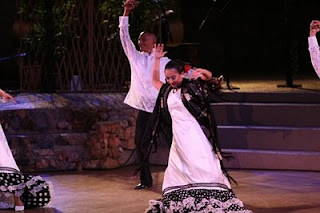 
"Paso Doble" Spanish-influenced dance. I like how the girl flirts with the priest at the end.

Walking into the amphitheatre, I didn't know what to expect. KNL has always been an institution within the Festival of Philippine Arts and Culture (FPAC), so I was familiar with the organization. But at "Magkaugnay" (translated: interconnectedness), the cutting-edge artistic messages blew my lid. How can you mesh in Spanish guitar music and Moro gong sounds? Maybe I'm naive and uninitiated, but it was the first time I've experienced this bold and brave attempt at sonically layering and remixing the complex musical traditions of the Philippines. 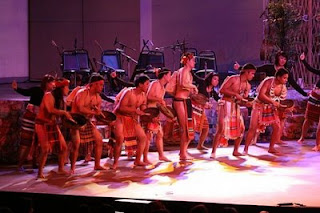 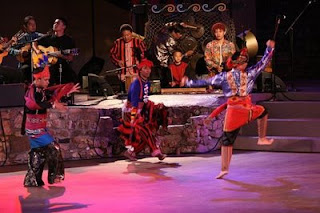 Photo credit: Yvette Federizo. Muslim dancers, with rondalla and kulintang in the rear.
Much of the show reminded me of the Fil Am turntablist, who blends, bends, freaks, and funks with existing samples and sounds. This is where the "post-modern" aspect comes in--an aesthetic experimentation of anachronistic moments meshed together without a claim to authenticity (for example: the Muslim should be compartmentalized here, the Spanish here, the hip hop here, etc.). Instead, the production was self-aware of the complex and varied music(s) of the islands and the Filipino diaspora (hip hop), and unapologetically remixed it--indeed, "interconnected" it--to form an aesthetically coherent (although complex) narrative on Filipino musical traditions. Tiiiight! 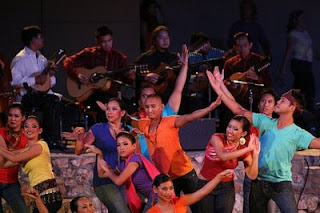 Re: Authenticity is a joke. So let's create and have fun!

At the closing of the show--after we get a good glimpse at the musical and dance traditions of the Aetas, the Muslims in the South, the Indigenous tribes in the North, and Spanish-influenced Visayans, the Catholic traditions of Ilocanos, etc.--the Pinay prances back on stage as the music violently meshes together again, almost rumbling in its forced synchronization. As the sounds climax, she looks down at her I-Pod, turns it off, and the music ceases. 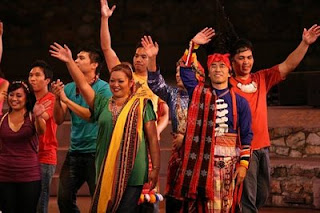 Festival reflections: When the fun is done

So many things happened in the past week, that it is difficult for me to process. Where to start? I don't know. Everything seemed HUGE, so it feels insufficient to just mention a few things. Since this blog is dedicated to hip hop culture, and I helped spearhead the hip hop programs for the festival, you'll soon read upcoming interviews and reflections about the following programs related to FPAC:

FPAC Hip Hop Circle at Lost Souls Cafe!
Sharing the table with the new and old school, this event hopes to be the start of some solid documentation on Fil Ams in Hip Hop culture. A night to remember! Among those present were filmmaker John Castro (The Debut), Oliver Wang (Fil Am DJ historian), Joe Bataan (the King of Latin R&B), Kuttin Kandi (Turntablist champion and activist), Krishtine deLeon (rapper and journalist), Bambu (rapper and community activist), Mark Pulido (veteran popper, LA Fil Am hip hop historian, and elected official--how you like that bro?), and Arnel Calvario (doctor, founder of Kaba Modern, and President of Culture Shock LA). 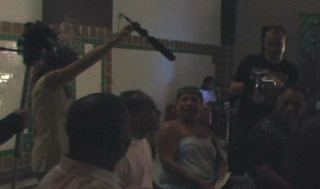 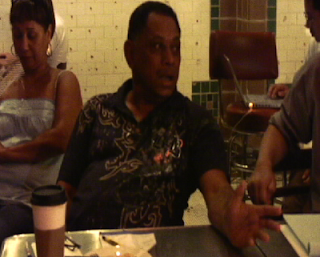 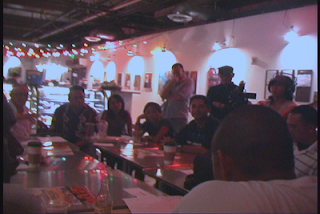 The cypher at Lost Souls 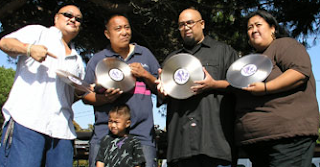 Show and Prove Street Dance Showcase
Who had the biggest crowd at the festival? Could it be Show and Prove? Unbelievable!

Kiwi and Bambu live reunion
I had a hunch it was going to happen, and so did many other Native Guns fans. Then, booyah! Two bald-headed brothas with tattoos! Brrrrat!! 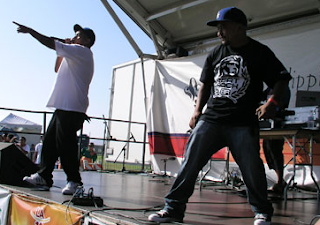 
Did you especially enjoy any particular program at FPAC this year?
| More
Posted by MV at 8:13 PM 1 comments