Rocking with the new generation: Notes on Rock the School Bells 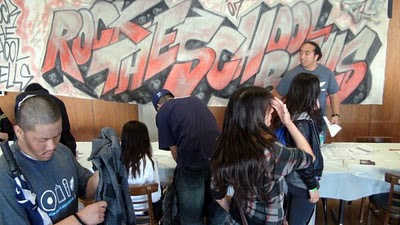 Credit: Russel Albert Daniels for the South San Francisco Patch
The 4th edition of Rock the School Bells, a conference geared towards middle/high schoolers that incorporates hip hop appreciation and social awareness, happened this weekend in San Bruno (near South San Francisco). Students were introduced to DJ, graff, and dance skills while also learning about hip hop fundamentals and the politics of the hip hop music business.
The conference was topped off with an amazing concert line-up, including some incredible talent from young (I mean YOUNG) Fil Am performers like the youngbloods in The Art of Teknique (ages 8 to 9, see video below) and Aftermath Youth (one kid had to be 5 years old!). This younger generation of dancers are mentored by their parents, who grew up on hip hop and still perform to this day. Nonetheless, the grown ups still repped to the fullest. The multitalented group Dirty Boots featuring Denizen Kane provided grown folk, professionally-polished virtuosity, engaging with minimal instruments (drum kit, bass, guitar) yet adding a deluge of flavor through rapping, singing, scatting, and genre versatility. 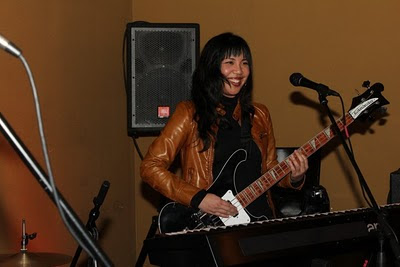 Multitalented Rachel Lastimosa of Dirty Boots
San Francisco stands as one of those unique geographies that can generate a critical concentration of Fil Am cultural production. Skyline College, which hosts the conference and employs a team of visionary Fil Am educators who organize the event, has a population in which 1/4 of the students are Filipino.

RTSB provides the venue for the new generation of Fil Am performers to showcase their craft, just as the car shows, PCNs, clubs, and Friendship Games did for their parents. The unbelievable skills that today's Fil Am youth display is a testament to the ingrained and intimate relationship that Fil Ams in general have with hip hop performance.
Here are a few pictures from the weekend from the South San Francisco Patch. 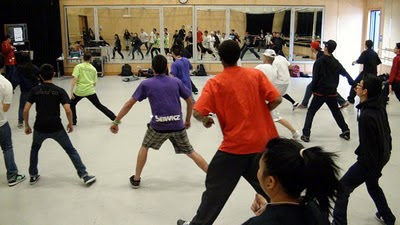 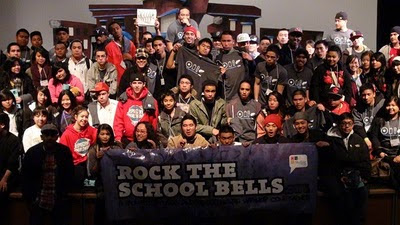 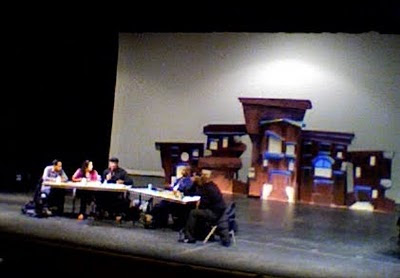 These children will rock you and school you! 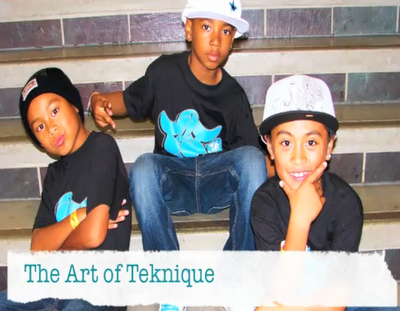 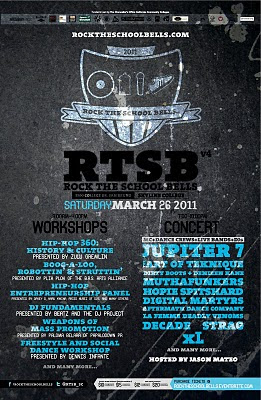 FilAm Funk, along with Paper Son, will be presenting "It Ain't Hard to Tell: Documenting Hip Hop" at the 4th Annual Rock the School Bells conference in San Francisco this weekend. We'll be sharing some documentaries and video clips with middle/high schoolers and discussing the importance of recording stories in hip hop with the hope of motivating them to create films of their own.

The conference will feature a killer line up of presenters and performers, including some artists who have been featured on this website. We're linking the old school with the new school with the new new new school!! So blessed to be a part of this amazing congregation of talent, genius, and passion.

You can purchase tickets to the event here.
Rock The School Bells conference is an event aimed to educate and empower the youth, students, and the communities at-large about the importance of education and personal development through the various mediums of hip-hop.

All proceeds go to educational scholarships for high school and college students.
For more information, hit up info@rocktheschoolbells.com.
---
| More
Posted by MV at 10:54 PM 0 comments

Continuing with the scoop on Seattle, we see the Blue Scholars doing it again: finding new and innovative ways to represent themselves and their audience. Since their "new deal" partnering with Caffe Vita and the reverse-signing with Duck Down Records, Geo and Sabzi are now formulating an investment-strategy powered by YOU, the fan. Interesting... Show love.
| More
Posted by MV at 11:41 PM 0 comments

I recently had the privilege to catch up with some down folks in beautiful Seattle. This historically-important city--especially for its labor culture, Filipino migration, and music scene-- represents a critical space for Filipino American community-building through art. Isangmahal Arts Kollective and the Blue Scholars are just two Fil Am-related groups from Seattle that have made a national impression.

10.4 Rog (Roger Habon) steps onto the stage as a young beat producer who is without question steeped in the Seattle music scene. His music has been gaining ample attention, a wonderful feat given his youth. His production on the free EP "Late" with The Good Sin provides you with unorthodox, haunting, but soulful composition. Here is a review of the EP in Seattle's weekly magazine The Stranger. I got a chance to sit down with this incredibly talented brotha and get educated on the Seattle sound. Dude is a bottomless well of information! 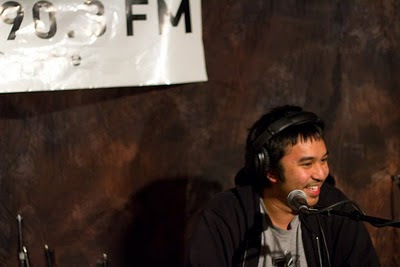 starting around 2008 i was djing around the city of seattle with four others. as a unit, we called ourselves 'paperboy' for promotional purposes, so that we could have a name on fliers. additionally we realized we needed to bill ourselves for the residency we had, so we took up names. for some reason, i picked '10.4 roger.' when i recorded an edit, or did a blend and put a popular acapella over some industry beat, i would tag my name at the end of the mp3 and share it with the other paperboy djs. over time i shortened the tag to '10.4 rog' and then started making fully produced remixes around 2009. by 2010 i was making more music than i was going out djing gigs. i guess that's how the name stuck.

How long have you been doing music and how did you get in to beat production?

as far as doing music, i can probably date that back to when my parents bought an upright piano. i was eight. i took lessons for two years and quit. i took up the snare drum in the fifth grade, and by the time i was about 12 i was sequencing drums and sampling on a computer. at the end of middle school i was djing on my brother's setup and buying records with my friend at the golden oldies in renton. i started taking piano lessons again in high school, however briefly, but that period of time set the foundation for most of my understanding of music theory. by the end of my junior year i was playing drums on a full set all the way through college, all while messing around on the turntables and with production on and off. making beats to me wasn't a discipline or something that i considered as anything more than a hobby till about two years ago.

What are your impressions of hip hop music in Seattle?

i think seattle hiphop has a unique type of influence on the national scene as a whole. producers vitamin d and jake one have, between themselves, made a name producing for gift of gab, redman, black sheep, de la soul, 50 cent, and freeway and hella more heads. on top of that, those two help put on the highest-profile beat battle in the country: the red bull big tune. out of the big tune competition, producers from everywhere have been able to build a larger following: 14kt, frank dukes, tallblackguy, dibiase, as well as seattle's own brainstorm and kuddie fresh. also, shabazz palaces has garnered huge acclaim in the past year from the likes of rolling stone and pitchfork. they work with theesatisfaction (here and here), two girls who i've had the fortune to know, and have since found audiences in all places. both the two aforementioned acts are signed to seattle label subpop, an indie powerhouse.

j pinder is coming up with the hall of justus camp. noclue, a guinness world-record holder, is doing work with the multi-instrumentalist/producer/mc terrace martin in CA. geo and the blue scholars have a huge rep pretty much everywhere. sabzi dj's for the acclaimed duo das racist. tha bizness are seattle transplants, and have done major work producing for drake/lil wayne, ice cube, mistah fab, and chris brown.
on top of that there's the bgirl/bboy scene and the djs which one might consider a whole other category. and on top of that, there is a huge spectrum of seattle area-based artists and peers that are doing incredible, incredible things musically, and not necessarily in the realm of hip hop, though they identify with members of the scene. there are literally too many good names to drop. 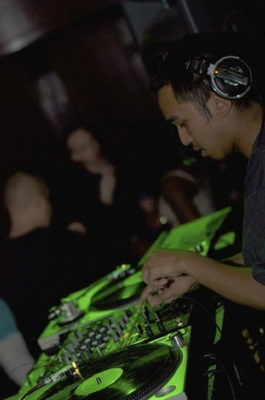 What is your weapon of choice? How do you use it differently than other producers?

just a couple midi controllers (a roland fp-7, an akai mpd32, and at one point a microkorg) and some softwares. i can't say exactly how i use it differently than other producers. i might be utilizing it much in the same way as the rest, to be honest.

my sound and approach changes per project. it's hard for me to say exactly what it is or how it comes off, but i will say that i like to play with harmony and time in a weird little way, i like to keep things simple, for the most part, and i like for my music to feel a bit loose.

What is Makipag and how did that fit into your story as a musician?

makipag was a group the homey joseph organized in college to gather artists together who were into making films, writing, performing, or making music. its most visible result was a monthly open mic (we liked to call it open stage to welcome artists that did not necessarily perform with vocals). as far as me being a musician, it didn't play too much of a part, but i did get to exercise different duties as a house band drummer, playing a kit and the cajon on a few occasions. 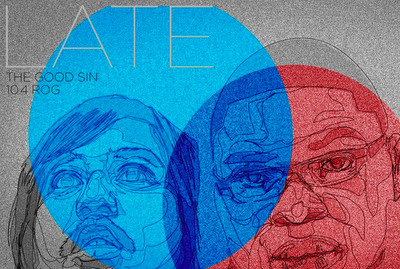 Who are some of the artists you've been working with? How did you make those connections?

lately i've been working with sax g, jarv dee and the cloud nice family, multo, and the good sin, who i just put out an ep-sized project with called "late" where he raps and i produce the music. i plan on working in this format with sax and jarv. i met sax thru the good sin, and jarv dee thru the cloud nice folk, who i connected with after remixing one of their songs. multo is a person i met thru makipag. he's a guitarist and singer/songwriter. i'm very fortunate to know all of them, and listening to their music makes me want to improve on the work i do and the way i work.

I hear you were mentioned in the Seattle Times. What is that story?

i got a placement in seattle times around october of 2009 for remixing helladope's "just so you know". helladope is one of the groups that comprises the cloud nice collective, and the seattle times music writer andrew matson has sort of been writing about my work ever since. i'm fortunate to have that sort of interest from somebody at the times, of all places, but it's nothing at all to be satisfied about. there's always the need for me to try and get better at what i do.