A stranger unto ourselves (and others): Know your history!

As if Jeremy Lin poses a real threat to the "racial ownership" of the NBA. Too funny.

Cole continues, "Like, they took over hip hop dancing. Oh, that hurts."  A picture of Asian males dancing in what looks like the World Hip Hop Dance Championship flashes on the screen.

Cole's anxiety might reflect a real (but ridiculous) fear. But his commentary also elicits a very real need of the Asian American and Filipino American community to know our history. Especially with hip hop, we have already seen this episode of "invasion" before, like in the LA Weekly article on the "invasion" of Filipinos in the Hollywood club scene.

I recently presented on the role of hip hop within the Filipino American (and global Filipino) community at a conference. I emphasized the fact that Filipino Americans have been embedded in and contributors to hip hop culture for such a long time, and that in theory, Fil Am students in college today can have a hip hop parents. And this has been the case for some students. Yeah, old school.

What is surprising, unfortunately, is that many (near 100%) of Fil Am students I have encountered do not know the history of Kaba Modern, the Invisbl Skratch Piklz, the Beat Junkies, Mike Dream, etc. Sadly, many do not even know who Native Guns and Blue Scholars are. Yet, many veteran Fil Am performers are coming out of the woodwork and telling their stories about "back in the day"--before hip hop was called hip hop.

During the conference, I provoked the question: For Filipino Americans, can hip hop be "trad" instead of "fad?"

Given hip hop's deep immersion within Filipino American culture, can it be just as "traditional" (if not more) than the "trad" dances of PCN--which are really liberal interpretations (of interpretations) of so-called Filipino dances?

So, as Asian Americans like our brother Jeremy Lin continue to gain more recognition and "voice," naturally, let us be proud and encouraging. But it is also critical that we know our own histories, so that when representations of Asian Americans (like in Cole's skit) poke fun at our "invasion," we can feel comfortable that the "truth" is less shocking.

With the news of the untimely passing of Don Cornelius, the founder and long-time host of Soul Train, the world gasped in sadness and shock. As a pioneer who is credited with bringing African American dance and music to the visual consciousness of the nation, Cornelius featured the biggest, baddest RandB, soul, disco, rock, funk, and hip hop acts on Soul Train, which aired from 1971 to 2006.

Dance styles that are staple in street dance circuits today--like popping, locking, and waacking--were often given their first chance to shine nationally on the Soul Train stage. This is certainly the case for Don Campbell and the Campbellockers.

As Asian American street (aka hip hop) dance crews continue to flourish around college campuses, we can say that the Soul Train stage first gave "breath" to the styles that we know and love. What is seen as "hip" and "cool" has a long legacy. In this case, the legacy is foregrounded by a push by Cornelius for more representation of African American creativity and "soul," which wasn't given light on television prior to the inauguration of Soul Train.


Today, Asian Americans and non-Asian Americans alike are advancing an alternative embodiment--a "cool" representation--through the kinetic language of street dance. And their getting noticed.

But, as "Americanized" subjects of U.S. colonialism, Filipinos have always been engaged with American dance culture since military occupation around 1900. In the diaspora, they have been American dance culture's most loyal adherents, as seen by male Filipino taxi dance hall performers in the pre-WWII era, the creation of Kaba Modern in 1992, and the dance crews that are thriving today (with a special shout out to the exploding dance crew scene in the Philippines). 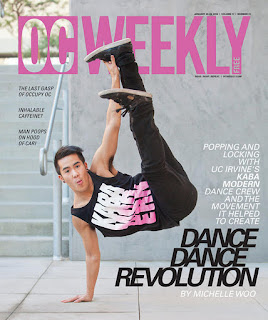 In a recent Orange County Weekly article, Kaba Modern founder Arnel Calvario testifies about the hip hop dance scene among Filipino Americans in Los Angeles in the late 1980s/early 1990s. During a time when hip hop was not widely accepted among members of the Filipino American community as a "Filipino thing," Calvario and other Fil Am hip hop performers (like Funki Junction, as written by Cheryl Cambay in Empire of Funk) had to carve their own avenues of hip hop expression. The article explains:

"Calvario, a freshman [at the University of California, Irvine] at the time, wanted to use the event [Pilipino Culture Night] to showcase the full Filipino-American experience, his experience, through the style of dance he loved most.

'I went up to the [club] president and said, 'Since it's Pilipino-American Culture Night and so many Filipino Americans do hip-hop, shouldn't we include our current styles as well as our historical, cultural styles?' he recalls.'"

Thus, Kaba Modern was born out of Pilipino Culture Night, which itself has acted as a promotional stage of Filipino representation. Hip hop has since been a necessary "suite" in the many suites of Filipino culture showcased in the PCNs (and Barrios Fiestas, on the East Coast).

When hip hop became more popular in the mid 1980s, Don Cornelius didn't understand the rebellious cultural genre either. But as a shrewd businessman and so-called representative of African American popular culture, he gave hip hop a shot on his show. Like Filipino American "ethnic absolutists," Cornelius eventually learned to accept hip hop even though he didn't like it. Hip hop's historical march forward was unstoppable, and existing cultural institutions had to deal with it.

Since the days of America's Best Dance Crew, street dance has not only increased in popularity among Asian Americans but also among the broader general public. But we must keep in mind that Soul Train provided a crucial venue for dancers more than 35 years prior to MTV's "discovery" of the styles. Now, street dance has been a stage--complete with a mic--for many young Asian Americans who are finding a "voice."

Street dance would not be the same without Soul Train. Certainly, the Filipino American/Asian American choreographed dance scene is indebted to Don Cornelius's legacy. Like Cornelius's vision of giving more representation to African American "soul" on TV, Asian American street dancers on TV are grabbing the mic (an ode to Rakim) like their on Soul Train.