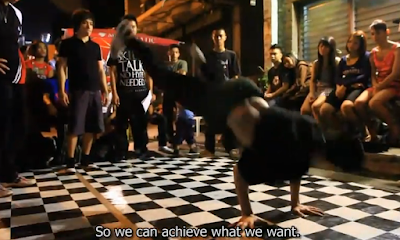 Why isn't hip hop big in the Philippines while it is "common sense" for Filipino Americans? This wonderful mini-documentary created by the folks at Strife TV offers a brief glimpse of the challenges among bboys in the Philippines (what city is this?!) and their global unrecognition.

Director MisLee raises some interesting questions about this circumstance of Filipino bboy invisibility and advocates for the raising of awareness of the rich scene in the Philippines. In her blog post about her documentary, she describes Project: P-Noise, the organization which she is involved, and identifies the interesting phenomenon of Filipino Americans who have gained international fame and "come back" to the Philippines (referred to as "balikbayans", such as Bboy Dyzee) in order to help build the bboy scene:

"The Project P-noise is a charity mission initiative to develop the bboy community in the Philippines by reaching out to the already existing bboys, especially the impoverished. The goal is to inspire the bboys of the Philippines to become world-wide contenders, by teaching them multiple free workshops, developing relationships with them and sharing with them the knowledge of how to make a living from this world renown dance. At the end of the workshops, a bboy battle is held for the bboys of the Philippines to put their skills and knowledge to the test, and giving them opportunities that they have only dreamed of...

It is a wonder why Bboying and Hip Hop has not flourished throughout the Philippines, which has almost the same type of situation, as the state of New York City, in the times of the birth of Hip Hop. Especially with Bboying which is the least expensive art form of Hip Hop. All you need is good music, and the floor to begin your release. It is also a wonder how Balik bayan Bboys all over the world have become legends in bboying: granting inspiration in the evolution of the international Bboying scene across the entire world, except for within the Philippines. Although Pinoy bboys are aware and inspired by these international Balik bayan legends, there seems to be a gap in national growth and creativity, because of limited opportunities and/or support."

"We will practice more effectively so we can achieve what we want. So wait for us, Filipinos there [Fil Ams]. We're going to be facing each other soon."