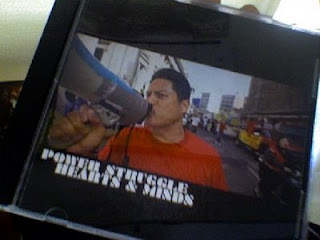 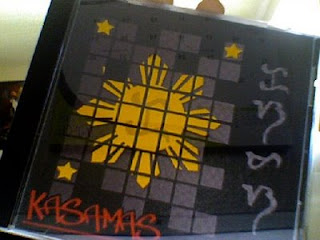 A few posts ago I commented on rap in Tagalog in lieu of the passing of the late, great Francis M. And boy, am I mistaken about the extent of rap in Tagalog today. Even though its not new (i.e. Francis M. has been doing it for decades), it seems as though rap in Tagalog is gaining more and more steam, and now even more among Fil Ams. Where is this movement heading? What will it look like in the coming years?

I copped those two CDs above from the Bayan Cultural Solidarity Night near downtown LA a few weeks back (Photo from Bayan Cultural Solidarity Night: Courtesy of Apollo Victoria). I've been a fan of Nomi of Power Struggle for a few years now, so listening to his album "Hearts and Minds" is a true pleasure. Nomi has a command of words and flow that many emcees lack. Sometimes he doesn't have to rhyme a word, but delivers a line with sharp certainty. Top that with progressive, radical, and inspiring lyrics about people's struggle and movement, then that's some hard-hitting shit.

As for the Kasamas CD, it's very well-done: the production is clear and soulful, the young emcees (youth from the Filipino Cultural Center in San Francisco) are slick, honest, and passionate. They give a good glimpse of their struggles and daily happenings in the city. But what's really interesting is the Tagalog rap in the album. Like Bambu says in one interview, people were asking how he raps so fast. He says that's just how his momma yells at him. Well, these young emcees demonstrate the quickness, alliteration, and rhythm that Tagalog enables. Saico (who cameos in "Hearts and Minds") murders ya with that machine gun-style Tagalog flow. 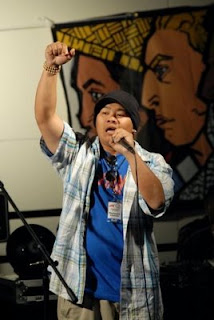 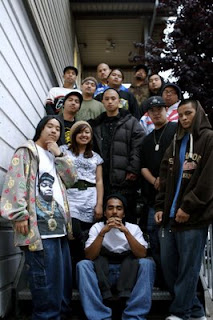 Emcees at the Filipino Cultural Center in the 'Sco
I wonder what the trajectory of emceeing in Tagalog will look like? Will it become more and more popular among both Tagalog-speakers and English-speakers? Can we officially designate the category "Filipino hip hop" since the hip hop is spoken in Filipino language (re: Latin rap which, incidentally morphed into what is now called reggaeton)?

I just discovered SOULFIESTA with the dude B-Roc. You gotta peep their shit, they doin some good hip hop in the Philippines (via Turbulence Productions). Rap in Tagalog! Here it is!! Ain't it so fresh?

a couple of the links don't work the Kasamas Cd link and the power struggle link dont work. But Good post hopefully it's not all tagalog rap cause it's still hard for me to understand fully.

Thanks for the shout Mark!!