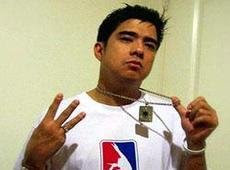 I have to admit I don't know much about hip hop in the Philippines. I seem to focus exclusively on hip hop and Filipinos in the States. And, much like Kiwi suggests in his blog below, as a U.S. Filipino I have misconceptions about the "quality" of hip hop in the Philippines. I have much to learn and appreciate about hip hop there, and Francis M. looks like the dude I should (all Fil Ams should) get to know.
So it is very sad that he passed away today after a battle with Leukemia. I know its some dumb cliche shit to appreciate a rapper more when he's gone, but I think Francis M. is the one rapper in the Philippines to study hard, especially because his career has lasted so long, for more than two decades.
Many people in the States might not know, but there is a vibrant hip hop culture in the Philippines. The folks at SoulSonic can testify to that. So check em out and show love.
For now, here are some articles, including Kiwi's, to give you a little more background on Francis M.--his rich contributions to hip hop, to the people of the Philippines, and to life. 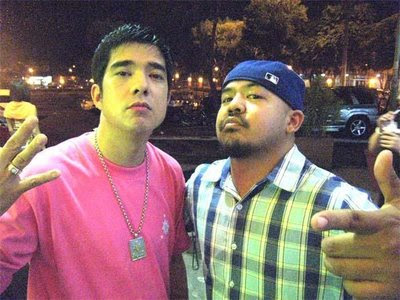 Francis M. and Kiwi in the Philippines, 2007
From Kiwi Illafonte:
"...After that night, I remember going back and borrowing (okay, stealing) all of my homie’s Francis M songs. It took me a minute to figure out the tagalog, but I understood. These songs were about the people. The kababayan. Our struggle. And not just on one or two songs neither. And the youth I work with, who grew up to your music, when they speak of you with reverence and respect, I understand why. I would probably speak of Chuck D or KRS ONE in the same way. I would probably speak of some of our local elder activists in the same way..." CONTINUE READING
From SoulSonic:
"Francis Magalona passed away today at around 12 noon after battling Leukemia for almost 7 months. The whole hip-hop community is now mourning for the death of an icon. Condolence to his family and loved ones - SoulSonic" CONTINUE READING
From Allhiphop.com:

"Francis M, a trailblazer of music and fashion in the Philippines, has passed away after an arduous struggle with leukemia. Known in his native homeland by the title of Master Rapper, Francis M (Francis Magalona) inspired strong patriotism among his country’s youth throughout a celebrated career spanning Hip-Hop, movies, fashion, and photography." CONTINUE READING

*New from Prometheus Brown (with music):

"...Crowned as the godfather of Filipino hip hop, Francis M doesn't just get props cause he was the first to push hip hip into the mainstream. He gets props cause unlike everybody else he was on some truly 'for us, by us' shit." CONTINUE READING

thanks for the link brother!

Homie, I wrote a little something regarding Kuya Kiko on Doorknockers. Lemme know whatcha think -

Apparently Francis M was in Virginia Beach a couple of Fil-Am Friendship Days ago. (Va Beach's July 4 celebrations). Might have been last year even. Have some pics w/him somewhere...

Hey man, this blog is truly unique and educating me in all sort of ways. Here's a link to another Francis M memorabilia online. I wrote it and would love to know you've read it. Me and Francis Magalona were supposed to work together on a book before he was diagnosed with his illness.

This site is bonkers! I love it! And will link it up on my site as well!