[Re]Presentation of the Filipin@ American 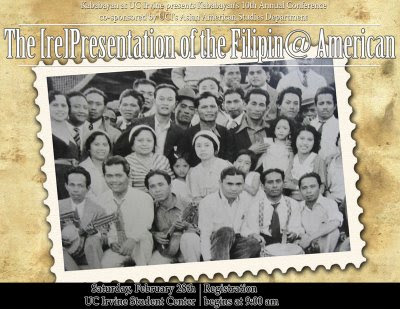 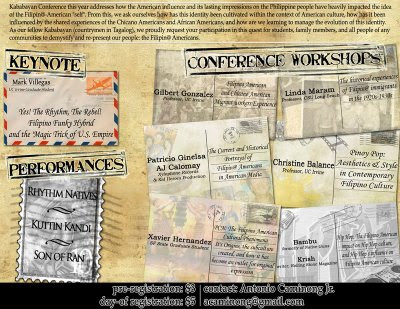 The KabaCon is coming! If you're near Orange County, CA on Saturday, February 28th then swing by the 10th Annual Kababayan Conference at UC Irvine. The venue is at the Student Center and registration begins at 9:00am. Pre-registration is $3, day-or registration is $5.

The conference is titled "The [Re]Presentation of the Filipino American." Kinda sounds intriguing, no?

"PCN: The Filipino American Cultural Phenomena Its Origins, the Subculture Created, and How It Has Become an Outlet for Original Expression" with Xavier Hernandez (SF State Graduate Student)

(Those are some long ass titles)

The line-up looks nice. And the keynote speaker? It's none other than yo boy talking about some mess: "Yes! The Rhythm, The Rebel! Filipino Funky Hybridity and the Magic Trick of U.S. Empire" (and that's not a long ass title?)

And, later on the very same day, you need to check out my man Tad Nakamura's new film, "A Song for Ourselves" in Little Tokyo. Tad chronicles the art, activism, and passion of the late, great Chris Iijima, who sang the songs of revolution during the Asian American movement in the 1960s. I like how Tad ties in the art of the pioneers like Chris with the hip hop of Filipinos today. By the way, Bambu, Kiwi, and Blue Scholars will be performing after the screening (what!).