"You would think he'd get love when he got to the States
Realized that all the promises they offered were fake
Denied benefits for Filipino veterans
Thousand miles away from home
Experiencing hell again."
-Kiwi, "Home"

"He left in late September
Said he'll be back in July
Now the child is askin,
'Mommy, why did Daddy have to die?'
She said, 'he fought for freedom'
But she knows its just a lie
Cuz her father was a veteran with benefits denied."
-Blue Scholars, "Back Home" 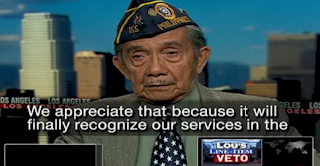 Lou Dobbs: "It's quite a shame that it's taken so long for our country to meet this obligation."

We've heard Filipino emcees, poets, and visual artists using this issue as a staple when commenting on Filipino political issues. Perhaps many of us became "politicized" for the first time because of this very heated issue. But now that the bill addressing Filipino WWII Veterans service has passed (with the Stimulus Package last week), what's next? This all seems kind of anti-climactic, right?

Anyways, I'm sure many of you have been following the debate on the newly passed Filipino WWII Veterans bill that addresses the 1946 Recession Act that stripped the veteran status of Filipinos who fought alongside the U.S. as commissioned by the U.S. government. Filipinos were uniquely targeted in the Recession Act, as other countries also fought during the war alongside the U.S. but were still given U.S. veteran status and all its benefits. This occurrence is informed by the fact that the Philippines at the time just after the war was still under formal U.S. colonial rule.

Anyways, there is lively debate on whether the Stimulus Package passed by Congress and signed by President Obama sufficiently redresses the injustice done by the 1946 Recession Act. In an LA Times article, the provision in the Stimulus Package regarding the Filipino veterans is as follows:

BakitWhy.com has some good analysis, especially in the "comments" section of the entry.

And VB2DC gives some very astute points regarding the debate. Here is a little snippet:

"Dissidents of the bill argue the following: ...Proponents of the measure express: So these are the essential questions:

Is the recently passed Filipino Veterans legislation enough to redress the injustice inflicted by the 1946 Recession Act? And, if not, will there ever be a more sufficient bill that will pass?

Regardless if this bill fully recognizes and redresses the 1946 Recession Act, the Recession Act itself and the subsequent political movement of Filipino Veterans, community organizations, academics, students, and political groups stands as a testament and provides a teaching moment about the complex and dynamic nature of not only Filipino political issues, but the broader U.S. legislative process.

Where there is injustice, there is always resistance. So expect this topic--regardless of the new legislation--to still be expressed in the milieu of Filipino resistance art. In "Back Home," Geo may say, "I don't wanna keep singin this song," but it looks like artists will still keep singin this song, now with bittersweet tones.
| More
Posted by MV at 9:54 PM

I think the dissenting argument has a lot of weight. 60+ years of veterans benefits have to add up to a bundle more than $15k. However, I'm sure that price tag would never be paid for. At this point, I'm just glad to see them recognized and their honor (at least some of it) restored.