The world watched, then forgot: Reflections on People Power 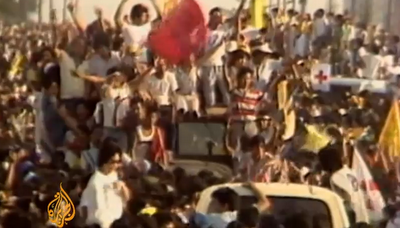 This week marked the anniversary of the 1986 People Power Revolution in the Philippines. The mass demonstrations, which included people from all strata of society (the middle class was central) and the Catholic institution, flooded EDSA Blvd. in Metro Manila and eventually forced out the dictator Ferdinand Marcos. Marcos, who declared Martial Law (which meant suspension of the democratic process) in 1973 was supported by the United States militarily and financially.
People Power provided a model of peaceful protest for other nations (especially in Eastern Europe) to follow. Today, in North Africa and the Middle East, it seems that People Power has not translated as the appropriate analog. Why?

The question as to why People Power has not popped up on the lips of CNN, MSNBC, Huffpost, etc. pundits is a mystery considering that its parallels to current unrest are obvious: dictator (U.S.-supported in the case of Egypt, Western-supported in the casse of Libya), cross-class peaceful urban protest, and demands for a democratic process.

Al Jazeera seems to be the only news network that has taken time to analyze the People Power model's relevancy to the mass uprisings in North Africa and the Middle East.

Instead of dwelling on the shaky comparisons of today's revolts to the Tiananmen Square massacre (this was a loss for the protestors) and the Iranian Revolution (this was largely religious-based) so favored by the major U.S. news outlets, the clip above directly engages the Philippines to the what is occurring today.

As you've seen in the video, one interviewee gets the urgency spot on:

"What these people in Tunisia and Egypt have to watch out for, the same thing that happened to us. If they don't write it into their textbooks and educate the next generation of children that what happened was a bleak and black people in their history then they will see Mubarak's descendants and Ben Ali's descendants come back in ten or twenty years."

Clearly, the revolution in the Philippines was a limited one. It was actually more a reform than a complete overthrow of the system (i.e. it had a middle-class dominated agenda). Many things still need to be done, as you know. After the celebrations (Tunisia and Egypt especially, we have yet to see what will happen in Libya, Bahrain, etc.), the sobering reality of neoliberal trappings in the post-revolution era will have to be examined by the opposition.

(Valerie Francisco provides a rich narrative of the People Power moment, the lack of people's governance, and the infrastructural/developmental urban facade in post-Marcos Philippines).

Kiwi has it right in "Imagine." Let us imagine how a peaceful and just world can be. Then, let us act:

"Imagine if we got people to start thinkin.
Got people to stop talkin
And start doin
And come together to start
This next movement.
Imagine.

What if we stood up and fought for peace?
Took the cities and blocked the streets?
With a voice that would rock the beast?
Imagine what this world would be like."

The Philippines teaches us that the revolution is never complete: the "revolution" is an ongoing process. In Tunisia and Egypt, the people imagined what their world could be like. Then they took the cities and blocked the streets. Now, it is up to them to make sure the revolution does not end.

As the National Day of Action to Defend Public Education approaches, Kiwi's words are a strong reminder that we have the power to imagine, act and start our own ongoing process; our own movement towards a society that respects its youth.

Never ending appreciation for the Philippines.