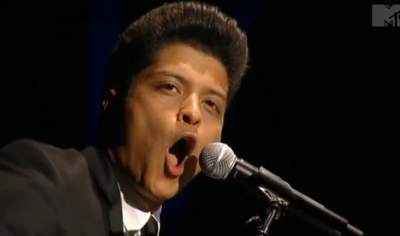 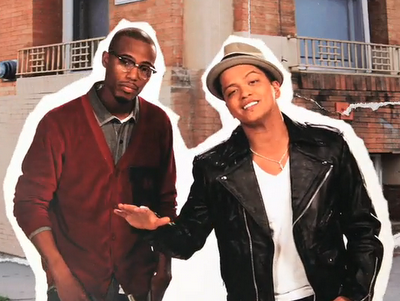 B.o.B. cuts it up with Mars on "Nothing on You" video

The islands are erupting on the American continent again! And Bruno Mars is surfing forward on a wave of magma. This Pinoy/Puerto Rican brutha from Hawai'i is dominating the airwaves, his hooks on B.o.B.'s "Nothing on You", Travie McCoy's "Billionaire"(two songs that were BOMBING the airwaves in Manila over the summer), and his own hit "Just the Way You Are" are infecting the world's eardrums (two at a time...mostly).

As you know, here at Hip Hop Lives we are preoccupied with Puerto Rico (see here: perreo, cuchifritos, lumidee, freestyle, wild style). And, Bruno embodies all the trappings of an island peripheral subject who is taking center stage. As a Puerto Rican/Filipino who grew up in Hawai'i, his mestizaje symbolicalizes the "inside yet outside" positionality of the United States' colonies/island states (the "American Tropics" as Allan Isaac would have it).

And when those peripheries somehow become mainstream (as in the Justice Sotomayor debates or in Obama's Hawai'i birthplace controversies), the obscured history of American imperialism winks into the consciousness of popular discourse (if ever so gently). But the "forgetting" of American island-trysting wasn't always the case in U.S. history. During the early 20th century, the U.S. congress debated on making the Philippines a state, and of course, the debate on Puerto Rican statehood persists. We know Hawai'i succeeded in becoming the 50th state in 1959. The Insular Cases in the early 20th century, in which the U.S. Supreme Court tried to rationalize the legal status of its island colonial subjects, gesture to the difficulty in making sense of people who occupy an "inside yet outside" status (or, to put in the jargon of the court justices: "foreign in a domestic sense").

Now if Bruno Mars plays basketball, that would be some crazy shit, given the Filipinos' ravenous appetite for b-ball and 2004 Puerto Rican Olympic team's slaying of the "giant in the north." (wuddup Hawai'i! got game?) 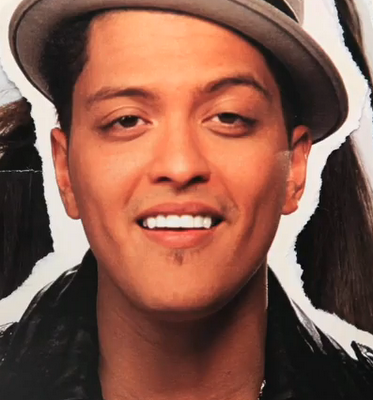 Mars, aka Peter Hernandez, has really white teeth. I think I'mma catch a case of insular!
In addition to Bruno's symbolic indexing of U.S. island colonialism (to note: I wonder if his family is affiliated with the U.S. military?), his musical success as a mestizo comments on Asian American illegibility in U.S. popular music. Basically, it doesn't hurt to kind of look like Ritchie Valens and Lou Diamond Phillips in the industry game. And in a double-whammy, if a Filipino looks more East Asian, they must perform (however reluctantly or eagerly) as a Chinese or Japanese character (who are more identifiable).

Is the Filipino mestizo the gateway for Filipino legibility into mainstream popular cultural recognition? It's worked for Brooke Burke, Nicole Scherzinger, Lou Diamond Phillips, and Apl.de.ap, who each represent their Filipinoness in their own way. Once we get over this mestizo requirement then maybe someone can finally get the homegirl Happy Slip on SNL so the world can love her...just the way she are.