Filipinos and Puerto Ricans in the South 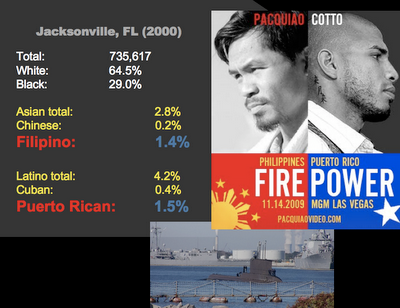 Did you know that that Filipinos and Puerto Ricans make up the largest non-black ethnic minority group in the city of Jacksonville, Florida (according to the 2000 Census)?

This is interesting for at least three reasons:

1) Filipinos make up an overwhelming majority of the Asian demographic, where Chinese are usually the dominant group (real or imagined) in major cities. Filipinos are 7 times the population of Chinese in J-Ville.

2) Puerto Ricans outnumber Cubans by almost 4 fold. Cubans (not Mexicans as in the California) are seen as the dominant "Hispanic" demographic in Florida. Here, Puerto Ricans make Jacksonville the destination of choice.

3) Even with their immersion and contribution in hip hop culture, Filipino Americans and Puerto Ricans rarely occupy the same geographic space: Fil Ams are more West Coast, Puerto Ricans are East Coast. In Jacksonville, these disparate groups come together: a true aberration. Chicago is probably another city where they live in the same city in (somewhat) high concentrations. What would happen if more Filipino Americans and Puerto Ricans lived together in the same space? What kind of Rock Steady Crew would that look like (Fil Ams have a notable presence in RSC in the West, and for sure, Puerto Ricans have dominated RSC in the East)?

For some reason, this topic seems bigger than Dayanara Torres or Gary Valenciano...