Hip Hop Mestizaje will be showing in San Francisco on Sunday, October 4th, along with other great films. Thanks Kularts!! I'll try to make it to the Q&A, but no promises... 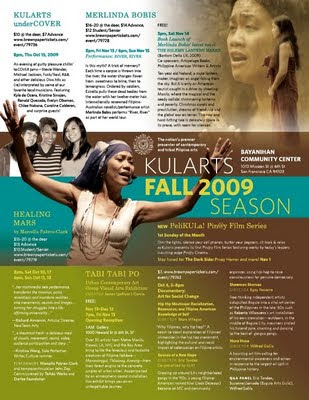 Hip Hip Mestizaje: Racialization,
Resonance, and Filipino American
Knowledge of Self
Director: Mark Villegas
Why Filipinos, why hip hop? A coast-to-coast exploration of Filipinos immersion into the hip hop movement, highlighting the cultural and racial impact of colonization on Filipino artists.

Sounds of a New Hope
Director: Eric Tandoc
Co-presented by ALAY
Growing up around LAs neighborhood gangs in the 90s, a young Filipino-American named Kiwi (Jack DeJesus) became an MC and community organizer, using hip-hop to raise consciousness for genuine democracy. Through sharing life experiences, beats, and rhymes, youth from San Mateo to Metro Manila make connections across oceans that inspire the next generation to continue the ongoing struggle for freedom.

Showman Shaman
Director: Egay Navarro
Free-thinking independent artists catapulted Baguio into a vital art center of the Philippines in the late 80s such as Roberto Villanueva's art installation of his own cremation - outdoors, in the middle of Baguio City, mourners circled his funeral pyre, chanting and dancing to the beat of gangsa gongs.