Massive Takeover? Will Seattle own it? 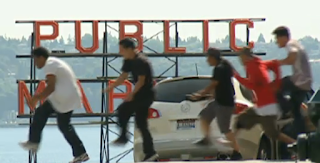 Instead of flying fish at Seattle's Public Market, flying Monkees.

Big ups to the crews who competed on the first episode of Season 4 of America's Best Dance Crew. I've been having conversations with a few b-boys and the consensus seems to be that the Massive Monkees are in a position to flatten crews into submission. No b-boy bias right? The b-boy cred for the Massive Monkees is serious, plus they got paramount skills for the "choreo" too.

Just one example of the veteran status of the Massive Monkees: I remember back in the late 1990s me, my crew, and other Pinoy hip hop heads used to swap bootleg copies of homemade Massive Monkees VHS tapes somehow acquired from Seattle Filipino network sources. Over 10 years later, the Massive Monkees are still making a name for themselves across the country, but this time through MTV and the internets, not from blurry, dubbed-over, crumple-ole videotape. (Ya'll jville heads still got those tapes?) 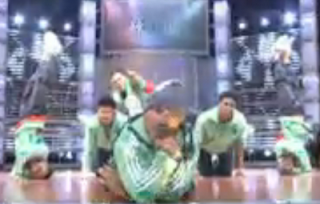 And ABDC is giving center stage to Filipinos and hip hop/street dance for all the world to witness (although I hear in the Philippines they are still only airing Season 2). To explain the intensity of this season's competition, check out this killer quote by Marcus (he dies?) in the Massive Monkees introduction during the first episode:

"We take extreme pride in being b-boys. Supercr3w was b-boys. Quest crew did b-boy moves. But we're really b-boys. We live and die it everyday."
Rillz? Mayn, then we better see some maniacal, magical, megalomonumental moves we aint neva seen before. Testify brah.

The other Filipino-dominant crew, Fr3sh, gave a fun and energetic performance, but unfortunately they were the first crew eliminated. They opened their performance with green hairspray or deodorant-lookin spray, to I guess signify their freshness. They said, in their introduction clip, they didn't want to be compared to other Asian crews like Kaba Modern or SoReal Cru (aren't there like 12 other crews who look like this?), so they tried their best to stand out from this reflexive racial cataloging. We gotta give them props--they look good, they're hella Pinay/oy, and they're East Coast! They were not as clean, intricate, or acrobatic as other crews on ABDC, but we should congratulate them for making it on the show.

Now, all the Massive Monkees accolades aside, the crew I think we should look out for is Rhythm City. They are clean, versatile (they got an extensive cache of styles), the ladies are sexy (come on, when will at least one lady win?), they are from the Bronx (hey, that's hip hop capital), they're not Asian (I'm just keepin it real), and they are not a b-boy crew. After 3 seasons of b-boy domination, will MTV want a 4th Asian/Latin looking b-boy crew to win again? I guess we'll see. Rhythm City definitely raises the level of competition, so keep ya eyelids peeled for these guys/gals.

BTW: How do crews practice the specific segment of the song (in this episode, it was "Boom Boom Pow") for Sudden Death battle? Looks suddenly rehearsed... Any insiders?

Also, congrats to the Philippine All Stars for making it to the championship round of the 8th Annual World Hip Hop Dance Championship against France's R.A.F. Crew, who took the crown away from the All Stars this year. Astig! Next year nalang pare!