On growing up Fil Am today: from "fobby" to fly 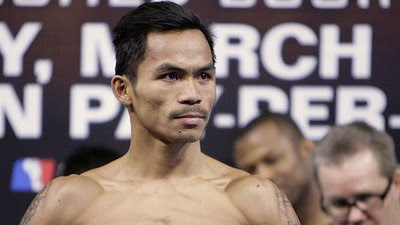 Yesterday was a good day. After a great line-up of NCAA football games, the night ushered in a new era of boxing with the victory of Manny Pacquiao, and the end of a legendary era with the womping of Oscar De La Hoya.

Sitting there at a homey's pad in Historic Filipino in LA (click here for a glimpse of us celebrating the TKO) with a gang of barking Brown folks, BBQ and boxing, I reflected on how growing up Fil Am today is so different than back in the 90s. Granted that I grew up in the South (in a very red county) and there weren't as many Filipinos as there are in the West Coast, I think in general, young Fil Ams have so much more opportunities to demonstrate their pride. I mean, under one house there was the Pacman (on the TV), Kiwi, Bam, Krish, and a whole host of Fil Am community artists and activists. LA may be an anomaly in comparison to the entirety of the U.S. because of its large and historic Fil Am community, but these folks, especially the artists, have an unprecedented reach to inspire young folks nationally. And with outlets like Heavy Rotation, I suppose a reach to inspire internationally.

Maybe its an internets-age thing. But I just have a sense that if it were even just 6 years ago, young Fil Ams wouldn't so much be rockin the Philippine flag sweaters, Bonifacio T's, and tri-star/sun caps. Nor would they be rappin in Tagalog. It must be noted, the growth in this Pin@y "pride" has to be linked with the explosion of the fashion designers (i.e. Beatrock), which by the way these Filipino-themed T's are not a new thing--think Tsinilas (based in Florida), Tribal Pinoy, or Downright Pinoy. 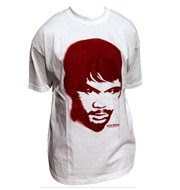 Maybe I'm wrong, and this is really a West Coast thing that has been happening strong before I moved here. Thoughts?* My point is that it is a special time to be a young Fil Am today (and maybe more specifically Fil Am masculinity). Where as in the 90s, we had a very Afro-centric hip hop, not the "Filipino-conscious" (which is not wholly separate from Afro-centric tradition, just as a note) hip hop --both men and women artists--we enjoy today. We didn't have a Manny Pacquiao. We didn't have a whole army of Pin@ys on reality TV (check out Bam's posting on "Reality and Rice"). And the fashion? Sure, there was the few Filipino t-shirt brands I would rock, but I would get clowned for being "fobby," a denigrating term people used to describe being "too Filipino." Not so much today. Today its a badge of pride and not shame to have Manny emblazoned on your shirt.** How many Pac Man shirts were there at the Bridge's show after the fight? Dang. A sista was even rockin a Philippine flag on her necklace. 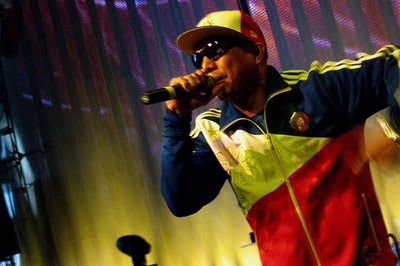 Maybe I'm wrong. Maybe the South is just a different animal. Maybe because the South and the East Coast in total doesn't have a "Pilipino Culture Night" (here and here) tradition. Maybe cuz there's no FPAC or Pistahan there. There are varying opportunities and spaces to learn and express "Filipinoness." Today, it seems like those opportunities and spaces have reached beyond expectation. 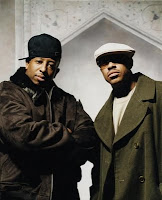 I mean, in the Souf, we did have Santo Nino and Gang Starr, but that didn't seem to be enough mayn.

--
*I get a sense that young Pin@ys in the 90s were also more immersed in gang culture. Pride for sure, but qualitatively different, in ways I can't articulate yet.
**I think that the Filipino-themed fashion today is more likely linked to politically-conscious movements, and not only a desire to look cute in a Pin@y tee.
| More
Posted by MV at 5:35 PM

I too hope it lasts and that it builds a momentum and more content...

I also wish all this damn apparel was union-made and sustainable from the Philippines...but what can I say.

P.S.
Fobby is muthafuckin fly. Always was, always will be.

glad you lovin the West Coast as that community sounds poppin'

I agree come the 2000's we're blessed with somewhat of a Fil-Am Renaissance; but to say,

"in the Souf, we did have Santo Nino and Gang Starr, but that didn't seem to be enough mayn."

rubs off as a total diss on all the organizations outside of cali--all be-it not as conscious, subversive, institionally-funded---that do culture shows and exert "pride" in their own way.

as far as the South's consciousness goes, i think it's still yet to be named. behind the PCN's of cali you had politicized student filipino groups doing anti-marcos campaigns, with Pistahan we had the momentous I-hotel struggle.

For our West Coast brethren, it's a testament keeping the history alive in all the institutions; and a very special place bc of the demographics and cultural/social capital coming out of the Bay and LA.

For specifically Florida, it's still very much a young community, post-65 boomers. I even remembered my first year at UF I dissed, prob now a classic show of Native Guns, bc by them Filipino i thought they could be wack. Self-hate is forreal with our 1st gen Fil-Ams cuz we're not taught otherwise. It was a privilege to learn Fil-Am history with our group at college, but now where's the application?

The work of institution building in Jax needs to be done but it will only happen when local leadership defines it for themselves..

I guess as you and myself grew up and moved out of Jax, it's easy to wash ourselves from that call of leadership to pursue our own self-interest/survival. But we are at a special place of privilege to make these connections...and ensure there's an explicit, conscious reach with the Fil-Am Renaissance----and maybe it's already happening, maybe we're just old (shoutout the Bakitwhy performance)

hmmm gave me an ideal, check my blog, I'll share my story of what Filipino pride looked like growin up in Jax... poplockpoetry.com peace!

btw - someone stole my Bayani, I-Scream bars, Jungle Bros..and 15 other CD's out my car this weekend

let's hope they pass it on to show some Filipino pride.

Umm, let me stop you from reinventing the wheel and getting schooled later if you submit work to academic journals: yes, the South is different and, yes, there was a lively and non-derivative filam culture during the '90s (re: turntablism, latin freestyle, pcns, slam poetry, emergence of filam novelists, etc.,) Your fuzzy "sense" that things are better than they were 6 years ago might be right; that they're hella more pinoy than, say, 12 years ago is empirically wrong.

I don't plan on submitting this to an academic nothing. Its a fuckin blog.

"Your fuzzy "sense" that things are better than they were 6 years ago might be right; that they're hella more pinoy than, say, 12 years ago is empirically wrong."

I said neither. what do you mean "better" than 6 years ago? Where did you get "12 years"? hahahahah hush...