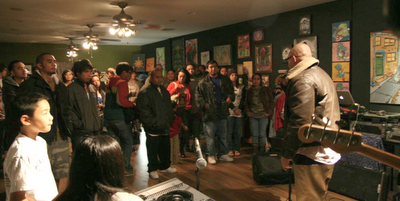 Fighting Cocks start off the night with their mellow, soulful style. Photo courtesy of Mike Nailat. Find more pictures at Mike's Flickr here.
On Saturday, December 13th, the Beatrock store in Long Beach and Sights and Sounds presented an art and music mash-up featuring paintings by LA favorites Stuter, Alfie Numeric, Pancho, and many others. Music was provided by Bambu, The Committee, Flowethics and J-One, Fighting Cocks, K9, and Mass Movement. 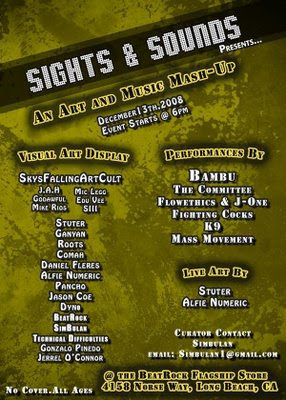 This was the first time I've been to the Beatrock store, and it was a great experience seeing all the art and performers congregate at a dope space not far from the city of LA. You can also cop a bunch of gear. Not too late if you're still shopping for gifts for the holidays. They not only sell the coveted Beatrock brands, but also other clothing, such as a funny new brand called Chicharron Adventures.

This store is quickly becoming a notable cultural space "outside" of the traffic-ridden LA-proper area. So for folks who live in Carson, Cerritos, Long Beach, Torrance, even Orange County, this spot will be a little bit closer if you usually hit up cultural events. It's a colorful, beautiful joint, so you should stop by even if there is no performance occurring. 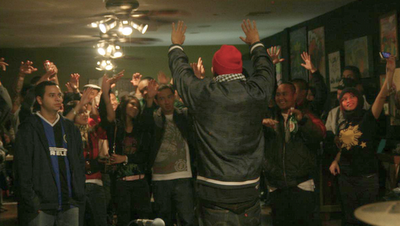 As always, Bambu wreck-shopped. The Committee ended their set with a hot 90's hip hop tribute--anthems such as Mtume (Biggie Smalls "Juicy" more specifically), Mary J. Blige, Talib Kweli (more 2003ish), all with live instrumentation! Hire them, Jimmy Fallen, instead of The Roots! Also, K9 represented the "5th" element of hip hop with a beatboxing exhibition. Aaliyah "One in a Million" all through voice, what? (Bambu controls the crowd. Photo courtesy of Mike Nailat)

The man behind Beatrock, David Araquel, is doing a great job with the store. Starting off as the kid in high school who people always turned to to draw sketches or paint murals, David has turned his passion into a successful cultural and business venture. From a simple idea years ago of building a store to a growing and thriving store/cultural space, this Beatrock thing is really taking off!
| More
Posted by MV at 11:41 AM