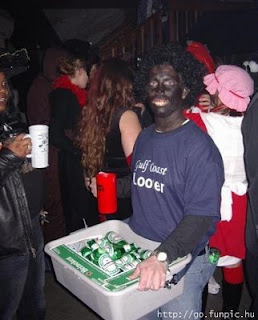 It was Halloween night, and I was looking for a dance floor to throw down and maybe even throw up. I was glad I found a party, because this city is lame. So of course I graciously accepted the invitation to this grad student shin dig from a colleague.

After walking into the party, I immediately felt out of place because I didn't have a stupid costume. But also I probably felt uncomfortable because I was one of three non-White revelers. No dancing, no costume. I wanted to leave.

But alas, you caught my gaze. "Another person of color!" I thought. But wait, as you passed by, you began to look like a buried coal miner. You flashed your gold chain with a dollar sign medallion as a testament to your downess. Yes, a down coal miner, I thought.

But wait, as you came closer, I had a sick, sick feeling. You're a white dude, in blackface.

With a warm beer in my hand, I asked my colleague (who is Asian), "So we're gonna have blackface at this party?"

His answer caught me off guard: "At least we're being ironic about it."

"Oh," I thought. "This is a hipster party." If only that was the case.

Aside from the fact that I see no irony in a white guy in blackface at a Halloween party (how cliche is that?), I am surprised my colleague said "we" to include himself in the crowd. By "we," I think he meant nerdy, unsexy grad students (but I guess that encompasses me too).

So I ask you: really? Grad school? Did you lose your way to the frat party?

Barack Obama had not yet been elected, and you still had the gall to celebrate a seemingly neutralized, unpoliticized, deracialized performativity of Blackness? Couldn't you at least wait till next year and say, "Hey, a Black guy's my president. How can this be racist?"

Just remember this: After centuries of being called ugly, savage, evil, unpure by Europeans...Black people don't need you to flaunt your ability to wash that shit off. Plus, you need to do research on the long, disgraceful history of blackface performance. It didn't start with Kramer.
As Bambu says in "Exact Change": "Maybe they associate us all with that--Overlook it just because a presidential candidate is Black--Nevermind the fact prison numbers is ridiculous--Instead we see rappers on TV flashin they necklaces..."

Next year, I recommend dressing up as a White guy. That'd be ironic. Eat hummus and pita, kiss your dog, recycle, shop at organic stores, buy expensive sandwiches...a presidential seal (instead of a dollar-sign) around your neck. Run with it homey.

On second thought, maybe you were really a Black guy, who put on white-colored make-up (even down to your neck and in your ear), then black-colored make-up haphazardly on top of that. If that were the case, you're freakin awesome.

Posted in the cut,
MV 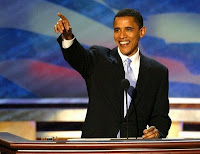 "Next year, I recommend dressing up as a White guy. That'd be ironic. Eat hummus and pita, kiss your dog, recycle, shop at organic stores, buy expensive sandwiches...a presidential seal (instead of a dollar-sign) around your neck. Run with it homey." loved it.

was that a pic of the guy? gross.

YO! I would have straight up sock the white outta that guy.

i wonder what he studies? African American Studies is officially on watch.

well, its a good thing that isn't really the guy at the party. if you google blackface you'll actually see a lot of these pictures.

If it really was our friend at the party, he'd probably meet his fate like Gus in Birth of Nation. But I take that back, cuz all the people in the party were complicit with it.

yo, i was actually a white guy for halloween..and i made sure i was a grade A tool to complete the character. ironically enough, mad asian shorties were trying to holla.