"All You Can!" A Street Fighter II Generation

I've been thinking about Street Fighter II lately. A friend mentioned that Street Fighter II was something that "housers" (who were somehwhat like the breakdancers of the early 90s) were really into. That's strange because I've heard about the houser-SF2 connection before. Why is that?

Anyways, here's a little letter to a personified SF2 to help us reminisce about the days of Ryu, Chun-Li, and Dhalsim. 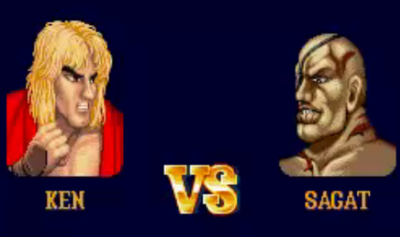 But recently you've been on my mind. Even in my dreams. Yes, I dream in Street Fighter II. Is that bad? Regardless of whatever pathology you've permanently imprinted in my brain, after hours upon hours and days upon days of play, you've taught me invaluable life lessons. 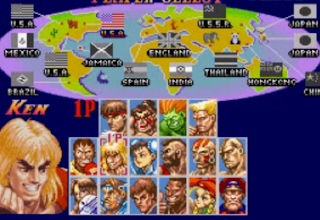 Through you, I first learned about the complexity of international relations (i.e. Guile's ontologically Western militaristic projections of power. And heck, the other Anglo is a British military girl...wearing tight spandex). What better way to convey the state of world affairs in the late 80s and early 90s than to show a big fat Japanese dude that sits on people, an Indian guy that levitates and spits fire, and a sinister Russian dude who is the final boss, but isn't really too hard to beat? Killed that fool, like Coke killed communism. That's all the worldly knowledge we need. Street Fighter is all teenage boys need for adequate cultural exposure.

Also, through your lessons, I also learned about the stringent and unwavering modes of racial classifications. People from Brazil are green monsters. Yoga really makes you lean and stretchy. I learned that you don't mess with white dudes who throw the first punch:

White dude: "I'll be whoever I want for Halloween!"
Black dude: "OUCH!"

Yes, you prepared me well for a journey through an arduous college career. But, I had a few questions to ask that have never been answered: 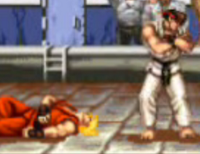 Are Ryu and Ken brothers? Why do they have the same exact moves, but one dude rocked Goldilocks' hair? Are you commenting on the myth of racial purity, of the already hybrid forms of culture, of the constructed discourses of authenticity? Or is blonde simply the opposite of "colored"?

Also, why could Vega jump on the fence and attack people, but no one else was able to? (1:14 here) Was the fence reserved only for gorgeous colonizers, and electrocuted the freaks? That's f*cked up.

Finally, since the Cold War is kind of over, who will be the ultimate villain? An Arab dude who swings from monkey bars? A Korean fool who jumps off of a nuclear warhead to melt you with flaming kimchee? Two gays who want to marry your daughter?

Anyways, it was fun catching up. I just wanted to thank you for introducing me to the world outside of my little town. The world is really made up of electric freaks, ladies with long, kicking legs, and fire-breathing Indians. I've attempted to befriend at least one of each of your racial classification. It hasn't been successful, especially when I pull violently on all my Indian friends' arms (sorry Satish).

Dope - good job on the demo reel of your documentary.

What you been up to sides dreaming of street fighter?

I used to kill it with Dhalsim.

And a "supacalifragilistic tick tack toe" to you Mr. Brown.

didn't we have this conversation with leo?

if sf2 taught you about ethnic/racial categorizations, did mk3 teach you about gross anatomy? "now i'm ripping off your head, and showing you your spinal cord"

i think MK was the first time i ever heard the words "beastiality" and really upped the ante on public display of punishment with all the "fatalities". maybe this was during the time we had the markets ramp with fear on a rising Asian market.

it had a great techno soundtrack though.