FlipTop flowin the dough in: The sponsorship era? 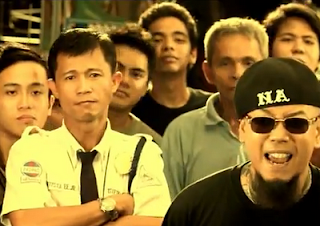 Si Kuya Guard knows wussup.
Our FlipTop favorites Batas, Loonie, and Abra are at it again, this time in a heated battle with the legendary Pinoy rock group Parokyo Ni Edgar. Everyone knows its bout to be on, especially Mr. Guard in the back nodding his head (ha!).

This TM Tambayan ad is nicely shot and pretty satirical. FlipTop and its stars are now gaining sponsorship. In the ad, these rap acts are visually parallel to the more widely-accepted, "safe," and recognizable rock group Parokyo Ni Edgar. The money is beginning to flow for the once underdog, underground, little-known FlipTop hip hop scene.  Will it only get bigger?


thanks for sharing...
สูตรบาคาร่า
goldenslot casino