Return of the Fil Am: MastaPlann x Bambu

Via The Hip Hop in Her. 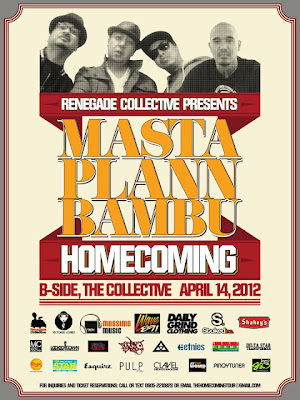 The connection between veteran Philippine hip hop group MastaPlann and Bambu, one of the hottest emcees in the nation right now, are alone worth highlighting. But even more, they are taking their unique link as Filipino American pioneers in hip hop to the Philippines in their "Homecoming" event in April.  MastaPlann, a group of Filipino American artists from California who made a lucrative career in the Philippines in the 1990s, are usually credited for bringing a certain aesthetic and style to the Philippines that had forever changed the Philippine hip hop landscape.  Bambu, who states "MastaPlann raised Bam" in the MastaPlann x Bambu collaborative song "Benefit," started in the early 2000s with a faithful following of Filipino American activista-types and has since rose in meteoric status to reach a broad, diverse, and nationwide (and worldwide) audience, while staying true to his message.

They come together at B-Side in Makati in Metro Manila in April to celebrate their links. Philippines and Fil Ams crossover! We send positive energy and good vibes to this intergenerational and international event.

Notably, Tracer One of MastaPlann, his son, and fellow member Type Slickk are featured in the 2009 Bambu music video "Crooks and Rooks."  Can you spot them?

Internet is the best place to sell rap and hip hop beats. You can easily post your beats on different website that will help to sell your beats. Such web portals will also provide you with tools that you need to market your beats effectively.