Yet another Thursday Throwback! We catch up with B-Roc of Turbulence Productions, who has since this 2009 interview been doing bigger and more magical things. The events and music he contributes to detailed in his SOULFIESTA blog is a testament to the passion he puts into the culture, even when times are rough for hip hop or life in general.

Thanks to all my ARTIST SPOTLIGHT interviewees, especially to those who reached out to me personally. 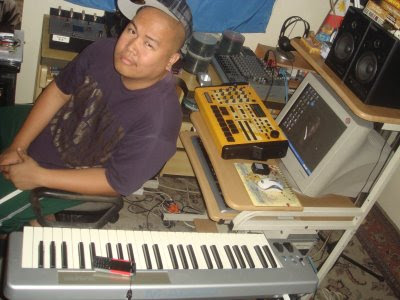 B-Roc formulating science in his lab
B-Roc, "Booked Me a Flight"
We're grateful and fortunate to build with B-Roc of Metro Manila's Turbulence Productions. Although he is humble about his leadership role in the Metro Manila independent hip hop scene, B-Roc is a major figure and a key player in the rise of hip hop in the Philippines and Asia. He's not only a monster beatmaker who is proud to exploit a bass-heavy thump, nor is he merely a gifted and passionate rapper... as a visionary for Turbulence and organizer for major hip hop events (like the infamous The Community gathering), B-Roc is shot-caller in this game.

The Community flyer for '08
During my trip to Metro Manila a few weeks back, I did not have a chance to meet with B-Roc, but met and interviewed many of his crew. What I have learned from these kasamas is that hip hop artists in the Philippines have a deep, almost obsessive hunger to perfect and progress their craft. This is not your corny OPM (Original Pinoy Music) cover songs we may be familiar with made for commercial pleasure--safe, candy-sweet, and friendly for the Wowowee-consuming crowd. This is that boom-bap hip hop shit. It took a few weeks to find them, but as I met these brothas and sistas, I understood that the love for hip hop in the Philippines is strong, and B-Roc is one figure putting in mad work to progress the culture and sound.

You can catch an earlier (and a whole lot meatier) interview with B-Roc on the SoulSonic blog here.
---
And now, words from B-Roc hisself: 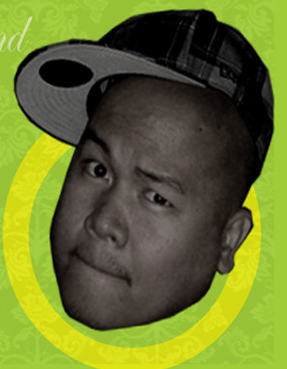 I am a producer, and the founder of Turbulence Productions. I was born and raised in the Philippines with my roots in Ilocos Norte. I basically handle the affairs of the label. I manage the direction of the label with the help of my team. I've been around man, traveled around for the music, toured Taiwan with international acts and welcomed international acts into the Philippines as well. I am an entrepreneur, a visionary, a pillar of the To The Billboard movement and Philippine hiphop.

To The Billboard is more than literally making it to a billboard. You know how in the Phils people equate being successful to being on a billboard, and its a symbolism of courage amidst all the detractors you have. Like at any point, all your haters will pass by EDSA (a major highway in Metro Manila) and if you do have a billboard there, it would seem they looking up to you and you looking at them. It’s a symbol of hope for anyone and everyone. It’s a movie, a book, and a movement. It’s amazing how people from around the world submit songs about To The Billboard and shout it out for themselves as well.

The independent hiphop scene in the Philippines is really fun, although at this point after doing it for quite sometime and having the success that we've had with it achievement-wise, we feel as though we need a bigger playground. The scene is very hot in talent -- hiphop as a music genre in the Philippines has been oppressed so much the past few years, which of course results to sheer creativeness on our end. I am a firm believer that oppression makes us all the more creative and substance-oriented. Like Rizal's best books was written at a time when his freedom was suppressed.

The independent scene’s major challenge now is relevance. With the technology now, making it easy for us to make music, record songs, the challenge now is keeping yourself relevant to actually make those songs mean anything to your listeners. Technology makes us not have an excuse for wack music. Technology helps us promote ourselves. Internet networking sites -- these are all pluses if we know how to secure our relevance first. Technology makes people think what we do is easy, people buy they little machines and post pictures of them and their equipment and say they are independent. I've said this more than a couple of times, independent for me, means being cutting edge in everything you do -- you're album design, the music, the marketing approach, the execution, the videos and STILL BE RELEVANT. 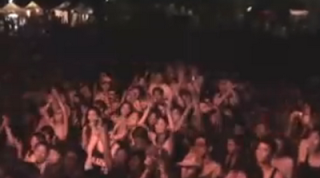 B-Roc rockin a concert in Taiwan
The people are what makes the music worth it. We are out here to out-do each other, and this is the form of celebration me and my team want. Lets compete to “up” the quality of this scene, lets be about our best songs and albums. This is how we want to preserve the culture, hiphop as means of excelling through anything (record label drought, financial downturns, not enough funding to fuel projects) -- we want to preserve the culture of “beating the odds” too. The scene is very much alive to the point that even rock heads show respect to our own musicality.
So the independent scene really is an exciting scene right now, we see more than artists rise to the occasion. We see entrepreneurs and promoters come to mold the club scene -- some older people just have a hard time embracing the newness of hiphop.

I got involved with the scene after working my ass off. I was meddling with beats the year when recording was jumping from analog to digital. I had a clear grasp of doing things independently and didn’t want to be an artist waiting to get his shot on a list or trying to be put on by a major act. I was learning the ropes from Madd World production, hyping for Dcoy for a couple of shows and just learning and absorbing as much as I can. All this, while still messing with rhymes with my former group, Crecon (Creative Consciousness) -- then we built Turbulence and embarked on the journey, to carry the tradition that Bomb Azz and Ill Def left me—being independent.

As a kid of the future then, I did link up with some artist online -- there was a forum for lyricists called Urban Pinoy, which is a highly creative bunch of emcees who would critique everyone’s work, including point of corrections and question/show the science behind the rhymes. This site allowed me to meet Nimbusnine, Pornstar, PHD, Haven, Trip tha Light and more Pinoy emcees that will remain unheard of but will live through my music. Some of them, I met as sheer raw talented hiphop heads and through the years developed to be some of the best the Philippines has seen. I am a firm believer of artist development. It’s a lost art, some people think all they need is good rhymes. I believe they need to be developed as a person as well. Some artists like Traumatik I hunted down, all the rest really is family.

There have been several conversations happening between artists in the Philippines and Filipino artists in the States. On my end alone I was able to capitalize this internet thing early on -- I sent so many beats to people who are on the same wave length as me. Reaching out, either way, whether its me or Fil Am artists is always a good thing. I'm surprised that some cats from the States even think I'm big back home, when really I struggle just like them. I enjoy conversations with our brothers abroad cuz we all speak of the same struggle, we just act on it differently -- we always extend a helping hand to anyone who needs it. I think with the emergence of Nimbus9 three years back, it kinda showed some cats that hey we are legit with our English and yeah we can flip it back to Filipino too without having a sour taste on your tongue. B-Roc and Chrizo feature in July issue of Gadgets Magazine
A lot of people juggle between English and Tagalog. Language is a medium of this craft. As I told you, I am a fan of artist development so Tagalog, as much as it comes naturally, we all need to study it too. Not via textbook but by continually using it and respecting its roots. Every one got they own twang and enunciation styles but really "if it comes from your heart then it can never be wack," word to Mike Swift. Luzon uses Ilocano in his songs -- the Philippines is a multi dialect country, and hiphop is about a message -- so whatever language you are comfortable with, use it -- and don't sacrifice the message just so you can spit in English. Be about the substance not just about the aesthetic.

The obvious influence in my beat production style are Just Blaze, Kanye, Primo, Large Professor, Pete Rock, Buckwild. I go for the drums. Whether it be an 808 bass heavy kick or something else. Andre Harris of Dre & Vidal once sat me and Chrizo down and told us that for him, the drums gotta be banging as it is the backbone of the groove. Locally Protege moves me, Juss Rye, Jedli, Mic and Skarm of AMPON -- they are a mean batch of producers.

I hope the independent scene could finally become a haven for business and art -- I could only play my role and hope that everyone else gets just as lucky. But as I told you, everyone here who think they can rap are suddenly artists, we are losing fans and this is what makes it suck. And when somebody breaks through there will be more kids who think they can do just that without putting in work and paying they dues. I hope to see the hard workers get a fair share of what the indie scene can offer and I want to see corporations investing in the scene and take the middle man (the labels) out and deal with us directly. 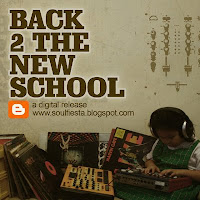 Back 2 the New School was a project we did for 2 weeks just to test our clock work whether we were getting rusty or not. We had cats even from Singapore rocking a Chrizo beat. What we try to do on every release is discover a new act that could potentially break through within the next few years. In this project we came across Kimmie, who has the makings of what could be the resurgence of Pinay homegrown talent in hiphop. The team just wrapped up Marquiss' GRAE (Greatest Rap Album Ever) which is a masterpiece. We are wrapping up recording AMP's GOLD BARZ. We will be working on Nimbus9's debut CD this year, and SILVERBACKS, which will be out as well.
---
You can catch B-Roc on his blog, SoulFiesta. And be sure to peep Turbulence's new spoken word poetry video, "Beyond Beyond".