What makes a "People's Champion"? 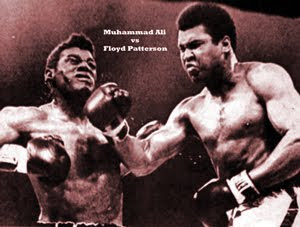 Check out this great article by veteran hip hop authority Davey D, who is featured in the opening part of my 2007 documentary, Hip Hop Mestizaje (embedded in the right panel of this blog).

Manny Pacquiao the People’s Champ: Is that too Much for Floyd to Handle?

"...While the world watched and cheered, we’re sure a certain boxer with a big mouth and lots of money sat at home also watching. There is no doubt that Floyd ‘Money Making’ Mayweather has come to realize two unshakeable truths. First, he can’t beat Mr Pacquiao. Yeah, yeah, we heard all the talk about how he’s a skilled precision fighter, a true student of the game blah, blah, blah…Save it. He knows it, I know and you know it. Mayweather watched and realized this past Saturday night this is man he can’t beat.

The other thing he realized is that he’ll never be seen as one of the greatest, even with an undefeated record. As a world champ, he misread history and what it means when you hold such a title especially as a Black man. The ring was always symbolic of power we did not have.. Even with boxing legends like Sugar Ray Robinson, part of what made him great was his accomplishments in the midst of hard oppressions. the accomplishments of boxing greats like Joe Louis and Jack Johnson became a symbolic victories for all those who felt marginalized and oppressed. Their victory was our victory.

Manny Pacquiao has captured that spirit globally. Sadly Floyd Mayweather has misread the signs of today’s times and missed the opportunity to be ‘the people’s champ‘. If Mayweather and Pacman were to fight and he somehow won, Manny would still be seen as champ all over the world. A Mayweather victory would be a hollow victory. Mayweather does not have the admiration of the people especially globally, and no matter how much he brags or ‘adroitly ‘plays the role of villan’ aka the ‘man you love to hate’, he’ll never be seen as a man for the people. What a wasted opportunity...."
CONTINUE READING...