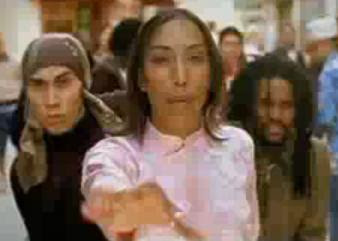 
I just wanted to post one of my favorite music videos by none other than the most tragically successful (paradox intended) formerly "underground" hip hop groups, the Black Eyed Peas. Before they got all Mickey Mouse-d-out when adding Fergie in 2003 and booting Kim Hill, well... let's just say they have become more "safe" (read: white) and their anti-industry and championing-underground edge was hit with a spiked bat, smashed by a steam-roller driven by an obese elephunk, and punched in the face by Ana "The Hurricane" Julaton. No wonder they got booed at the BET Awards...

Before they were the Peas, they were the Atban Klann and proved to be dope dancers, performing at many Fil Am hip hop events in LA in the early 1990s (when "house" dance was popular, mixed with hip hop jams). Best part of the video, 2:30 onward.

All in all, no matter how Disney they've become, they are still widely successful (read: $$$) and can kill almost any young choreo-dancing cat in a freestyle dance cipher.