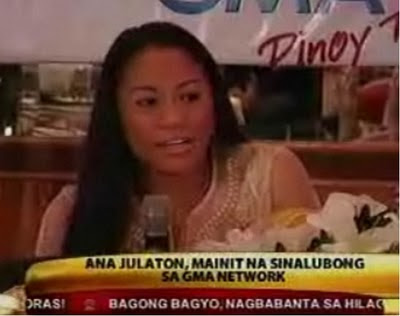 For the latest Philippine news stories and videos, visit GMANews.TV

Last week, WBO super bantamweight champion Ana "The Hurricane" Julaton made a trip to Manila. In the video above she says that this is her first trip to the Philippines. After watching her eat balut, attempt to utter certain Filipino language tongue twisters, and conscientiously use "po" in her interviews with GMA, I felt an affinity for Julaton, a Fil Am visiting the Philippines. Her U.S.-style speech (perhaps even a Bay Area speech) sounded "off" on a Philippine TV station like GMA. And the attempts to "authenticate" her Pinayness (in an earlier GMA interview she is classified as an "Overseas Filipino") goes to show the initial cultural distancing audiences may have from Julaton. But if she eats balut, calls herself "kapuso" (roughly, "of the same heart"), and recites a Tagalog tongue-twister, she is now "one of us", right? 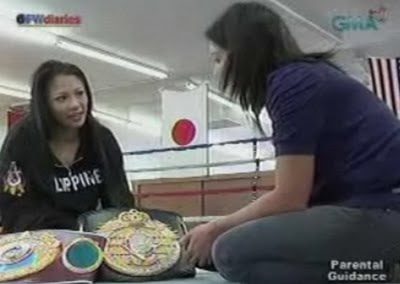 After interacting with new friends, everyday workers, taxi drivers, and the bureaucracy in the Philippines, my impression is that too many Filipinos in the Philippines don't conceive of an existing Filipino American community. This is strange to me because we are one of the most diasporic people in the world (if not the most dispersed since the 1970s).

I would suggest that Filipinos pick up the book Positively No Filipinos Allowed, edited by my friend Antonio Tiongson. I was surprised to find the book available at Power Books here in the Philippines. The book contains revealing chapters on Fil Am community spaces that might not exist or not be as prominent in the Philippines. The chapter on Freestyle music and turntablism in the Bay Area by Liz Pisares comes to mind. And Lakandiwa De Leon's article on hip hop and gang culture in Los Angeles is also foundational.

Because Filipinos in the U.S. create culture, build community, form vernaculars, and mix with blacks, Latinos, and other Asians (and speak like them), does that make them less "acceptable" Filipinos? If we are seen as "jologs" because we speak and dress in a certain way and listen to a "darker" music, do we have to legitimize our Filipino aptitude? Do we gotta scarf down duck embryos to prove ourselves?

However, identifying a Fil Am community does not mean that the Filipino American community is separated from a Filipino experience. Dylan Rodriguez, whose chapter "A Million Deaths?" in the book mentioned above, disagrees with the term "Filipino American." Yes, "Filipino" and "American" implies a conflation where there really is a relation of genocide and death. I agree. But for now since we do not have a grammar of diaspora, perhaps Fil Am is a useful placeholder for the unique and perhaps disavowed cultural space in the U.S. created among Filipinos. Sometimes "U.S. Filipinos" is used instead of "Filipino American". Fair enough.

What is important is for Filipinos in the Philippines to view Fil Am culture as legitimate and historically rooted. Often, Fil Am culture is just as anchored to black or Chicano culture as it is to Filipino culture (note: America does not equal white). It may be that Fil Ams who "return" to the Philippines are so "different," we don't speak a Philippine language fluently, we carry an accent, among other things (including most of times financial privilege), but its because we affiliate with U.S. cities as much as or more than with locales in the Philippines; San Diego, San Francisco, Virginia Beach, Pensacola, Queens, or Austin sometimes have more symbolic meaning to us than Manila. Fil Ams have been forming community and culture in these areas for generations, and some who are well into their 80s have never been to "back" to the colony yet. Does that make us "less" Filipino?

Regardless of the reciprocated "distancing" Fil Ams may feel from the Philippines, I would recommend all Fil Ams to go to the Philippines and visit family and make new friends. This has been my motivation especially since last year experiencing a piece of the hip hop scene in Metro Manila. Fil Ams need to shed the stereotypes they have of Filipinos...their own kapuso. Fil Ams need to understand that the Philippines as a diverse and transforming nation, not as a "traditional" "culture" frozen in time (as many Pilipino Culture Nights and Barrio Fiestas would like you to believe).

But not all Fil Ams can travel to the Philippines. For one, it's extremely expensive. Coughing up two to three months worth of rent money for a round trip flight is a large commitment. We all wish we can have JabbaWockeez, Happy Slip, or Ana Julatan steez and get sponsored to travel to the Philippines. And, some Fil Ams might even be reluctant to visit. It can be emotionally taxing. To grow up all your life as a Filipino living in the U.S., and then immediately being surrounded by Filipinos in the Philippines sometimes takes a visceral, mental, and spiritual toll.

There are heeellllaa Filipinos in the U.S. who can't speak a Filipino language (majority?). It will be a joy when we can be seen as true kapuso regardless of a championship belt or MTV-approved dance moves.

Yes, we are kapuso. But our kinship embodies much more than a GMA TV marketing campaign. Perhaps we need to understand authenticity as a myth in order to accept the variations in the Filipino diasporic community. When "Filipino" is not simply equated with exotic food or funny Tagalog phrases but understood in broader dimensions will we not need to justify Filipino diasporic differences.

Re: "Fil Ams need to shed the stereotypes they have of Filipinos...their own kapuso. Fil Ams need to understand that the Philippines as a diverse and transforming nation, not as a "traditional" "culture" frozen in time (as many Pilipino Culture Nights and Barrio Fiestas would like you to believe)."

yes, absolutely. This is something I've been talking with a lot of other Fil Am's, mostly writers and educators, and it's stunning, how many of these are still wrapped up in essentializing the Filipino as one static thing, even though so many of the Fil Am's I know do move back and forth between the USA and various places in the Philippines and I believe can see the diversity of the people there, but for whatever reason, still choose to view Filipinos as the monolithic block.

Another layer of essentializing I'd like to address is a current trend in going back to the pure, pristine "indigenous," which in my mind I see perpetuating the notion of the idyllic, innocent, "noble savage." Anyway, thanks for this post.

(On another note, thanks also for linking to me on your blogroll. I wanted to give you my current info. Am now blogging at http://www.barbarajanereyes.com)

I'd like to hear more about your thoughts on how the Fil Am community is imagined by Fils in the Phils.

In regards to your comment, I'd add that sometimes when Fil Ams visit, especially for the young professionals who are more upwardly mobile, they isolate themselves with a select, elite, cosmopolitan Manila group. Some people i know have never taken a jeepney!

Finally, many Fil Ams I am close to sometimes tend to essentialize the Philippine nation into one proletarian mass. Even though there is a large gap in between the class A elite and the class D poor, there are still many, many, many "in-between" Filipinos, who are not the boogey man bourgeois enemy, nor are they the completely abject poor. Diba?

"To grow up all your life as a Filipino living in the U.S., and then immediately being surrounded by Filipinos in the Philippines sometimes takes a visceral, mental, and spiritual toll."

That's the only reaction you'll have when you've been taught and conditioned not to understand your roots.

@BJR: how can you not view Filipinos as "the block"? Everything else is a chip off of it.

Also, i see nothing trendy about a sincere effort to return to traditional, indigenous values. Brought up & learning in western society it may be seen as perpetuating the noble savage archetype yet reindigenizing seems like the next logical step after decolonization to going back and preserving our cultural roots.