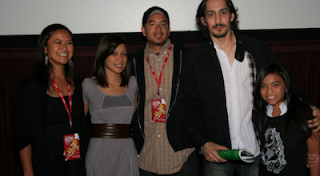 "Beyond Manila" filmmakers (and actress) at SDAFF
It's been more than a month since the 17th Annual Festival of Philippines Arts and Culture (FPAC), and the "beautifully traumatic" (all love!) event has recently been on the brain. Screening Legend and other great (and extremely emotional) short Filipino/Fil Am films at the San Diego Asian Film Festival (check out yo boy at 1:00 here) and kickin it with UCI Kababayan folks (faithful FPAC supporters) reminded me that I still haven't posted up some post-FPAC analysis.

No doubt, one of the highlights of FPAC was the Stacksvinyl.com FPAC Tribute to the Filipino DJ, which honored a handful of the most impacting Fil Am DJs out there. Thanks to Zeta Phi Rho at CSULB for hosting me for Pilipino American History Month last week, and allowing me to screen Legend and chop up on some hip hop history. I hope some folks in the crowd that night were also at the Tribute, because it was history in front of your eyes. 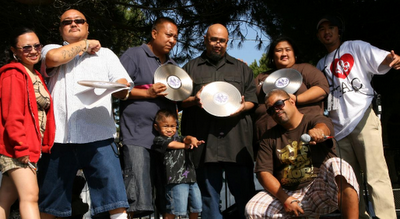 Kat, Nasty Nes, Babu, Babu's son, Rhettmatic, Kuttin Kandi, Brian Samson (Def Jam), MV (photo credit: Mike Nailat)
So it was a great honor to help put together this Tribute together with Kat and Mary Rose. Below are excerpts from DJ Dstrukt (2006 Stacks Amateur Battle Champ) , who opened up the Tribute with a turntable set, and DJ Nasty Nes, one of the honorees. We all hope this can be an annual occasion, and more people (especially the younger, YouTube generation) pay attention to those Fil Am hip hop heads who blazed the way. 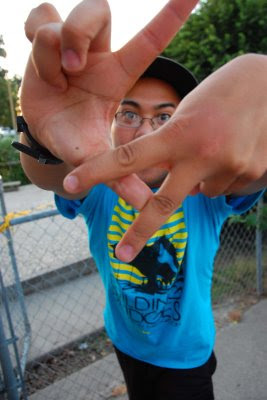 It was dope seeing Rhett and babu get love from the Filipino community. But I believe there are many more dj's and crews that paved the way for other dj's. For example, 5th platoon's neil Armstrong & Vinroc, everyone from the Skratch Piklz( Qbert, Shortkut, D-styles, Disk, Apollo, Mix Master Mike), Swift Rock, Mike Boo, majority of the Junkies, etc. Too many to name. The world is full with djs.

I felt more then honored to open for these legends. But it's kind of hard to do your set when you got Rhett, Babs, Nes, and Kandi in your peripheral vision. haha. We're all human and we all get nervous from time to time. 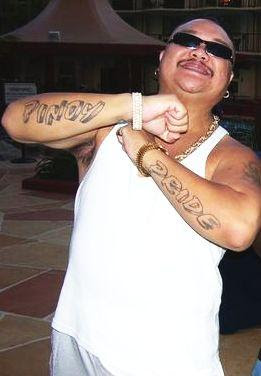 I expected a rare look at 4 legendary filipino dj's standing together on one stage sharing their experiences & knowledge with the public & with the younger kids who will one day would like to become a dj when they get older.

To me it was an honor to be amongst my peers & hundreds of filipinos in one area. My mom passed away nearly 30 years ago so to be able to get on stage & share my experiences of my mom & what she taught me growing up & to dedicate my award to her really meant a lot to me.

It was like winning an Academy Award. A joyous feeling to be recognized by your people. I almost broke down crying on stage because the FPAC Award really touched my heart & I will treasure the memories from September 7th, 2008 for the rest of my life.

I'm so proud of Babu, Rhettmatic, Kuttin Kandi, Brian Samson & Kat Carrido. I've known just about everyone of them for over 10 to 20 years. I have to give props also to Icy Ice who was out of town & couldn't be at FPAC this year. Icy Ice has been down with me when I was on top & when I hit rock bottom. In this biz, you know who your real friends & family are!
| More
Posted by MV at 7:36 PM

my ego likes being mentioned on other people's blogs. yay me!

on a more serious note, great job with everything and congrats on sdaff. yay you!

babu was at me and calamity's bday party! what what!

Did you by any chance happened to meet the guys from Wongfuproductions? I've heard they were there and I believe they were at Riverside too.