ARTIST SPOTLIGHT: The Diamond Dame steppin up the game

Finally, just got the Diamond Dame album in the mail... 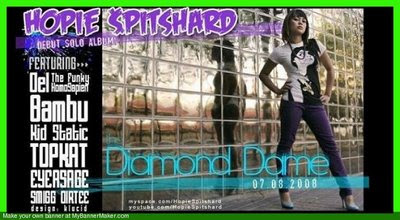 10. You need to support good Fil Am and women emcees. You'll live longer.

9. The albums is loaded with ill collaborations featuring Del the Funky Homosapien (what?), Bam (see verse below), EyeASage (“Supernova” verse is fire), Topkat (been sleepin on this brutha), Kid Static, Smigg Dirtee, and Madaleine Bolden.

8. 6Fingers is quickly becoming one of my favorite music producers. The combinations of colorful, quirky, fun Bay Area sounds together with a real deep thump (“Yummy” is ridiculous) packages the whole album real nice.

7. Hopie's lyrics and style, even down to the album art, brings a 80s / early 90s nostalgia that isn’t corny (like Lupe can be at times). It works! Gotta dig up that big ole' ghetto blaster... 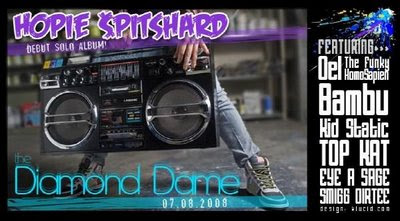 6. Speakin of 90s nostalgia, sometimes likened to Lady Bug, Hopie does a cover of Digable Planets' "Rebirth of Slick," that's, well, a rebirth of that knock's slickness--for the new millenium of course. 6Fingers does it right. “Fresh Like Dat” is one of my favorite jams on the album.

5. Can't knock the hustle-this album is street! Hipsters and backpacker elitists can roll too, but know Hopie ain't a typical underground “anti-establishment,” fuck Bush, fuck the mainstream emcee. It’s cool if you just discovered Immortal Technique your second year in college and yeah hip hop finally found you, but Diamond Dame is g...she'll eat you alive.

4. Although she is politically-conscious, well-informed, brown and proud, Hopie isn’t necessarily preachy in her lyrics. It’s simply great emcee skills (and wise ones will identify the radical meanings in her content). Her flow carries the album throughout, and it’ll probably resonate beyond the leftist Filipino nationalist hip hop heads.

3. The Diamond Dame provides good, solid hip hop in a hip hop world that is overly machismo, misogynistic, and self-deprecating. Like she says: "Popular rap music seemingly propagates only one-half the human experience -the male half- and a narrow perspective of the male experience, at that." On top of her unmatched skills, Hopie gets the message across that she can hold her own without submitting to some pre-written script about what an emcee--or a woman emcee at that--should be like. 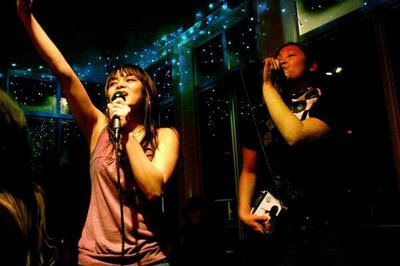 Mission Rock in San Francisco. Hopie is winner of the January Artist Showcase.

2. Hopie brings back a fresh fierceness that drives more toward a playful sharpening of emcee skills and not undeserved braggadocio. Don’t get me wrong, she got real swagger, but it’s the type you can really vibe to musically.

1. This emcee is hungry, and you can tell. Like the line in “Scene of the Rhyme,” she says, “I’m so hungry for the mic, I’m underweight.” And in her "Outro," "I'm the hungriest rapper, you on my plate ho." She might chew a poor suckas ear off. This drive really sets the tone for Diamond Dame.

So that's it! Why you slackin? Pick that shit up! Been waitin for good hip hop for a minute, and hopefully this album is gonna be a beginning of a lot more to come. Here's the Dame's interview with M.I.S.S. Crew.

For now, I just want to share some verses of the album that caught my attention, first one by Hopie and the second one by Bambu:

The first verse of "The Diamond Dame Intro." Check the back-to-back chain rhyme:

We ain’t neva gone be friends
Well it depends
Pretty soon I’ll make those ends
And yo ass will play pretend, then
When the Diamond Dame name
Come around the bend
Oh now we friends at last
Kissin ass so much
Put on some knee pads
We’ll back that ego*
Witness people will coppin*
Singles now yo lingo is in limbo
First you said you’ll neva make it
Hope is wack
Now you postin in the lab
Askin for collabs
Damn
What the fuck I told them
I would drop the Diamond Dame
Neva quiet since start
Neva pausin by my name
What they sayin*
They wanna underestimate me*
Choppin up my life
They investigatin me
Tryin to see who got me they bootlegs I get hand outs
Can a woman rap and put in worth
Who let the can out?*
Nope! I guess not
Hopie from the ground up
Slangin diamond rocks
Till your muthafuckin ears pop

Bambu’s verse in “Kings” blew off the top. Can't wait for the next album to drop!

Take it back to fat laces and Ah-dee-dahs [Adidas]
La-dee-da
Slick Rick on yall
The ruler’s back (say what?)
Minus the eye patch
You make music for dumb fucks
“Why the fuck would I buy that?”
You ain’t neva eva eva in yo goddamn life
Gone catcha muthafucka throwin dollas in the sky
Not when a dolla can buy a bag of rice and some bread
I’d rather cop the newest milk and hit the shelf instead*
See that’s some real king shit takin care of my folks
Don’t try to be the king if your reason is broke
Stupid fucka
Yo so ignorant
If Malcolm X came back he’d look at yall like “What is this?”
Get serious homeboy
Recognize potential
This is not why all of those folks died before you
We the kings, we hold things
That don’t mean shit
This is cool if we only wannabe kings for a moment.

Check the blog and get @ me at m.dotwrites@gmail.com if you are down.