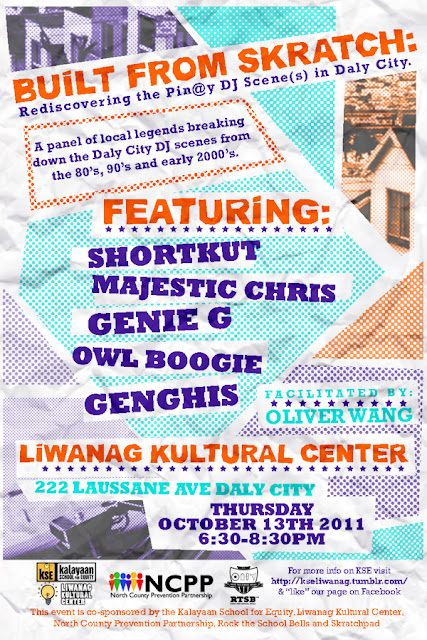 It has always been history in the making.  On Thursday, October 13th--in observance of Filipino American History Month--the event Built from Skratch: Rediscovering the Pin@ay DJ Scene(s) in Daly City will be held at the Liwanag Kultural Center in Daly City (San Francisco area).  Once written (or even dismissed) as "contemporary" or "modern" Filipino American culture (and therefore supposedly less important than "real" history) Filipino American popular music culture (i.e. hip hop forms) is more and more being archived along with "official" Filipino American history.

At the same time that Filipino American hip hop performances are legitimized and historicized under the auspices of researchers (check out OW's article "Unlimited Creations" in the Atlantic), educators, and community institutions, a younger generation of Filipino American who seem to feel distant from the Filipino American hip hop experience of the 1980s and 1990s (up to the 2000s for the very young) are now afforded the opportunity to learn more about the cultural contributions of their kuyas, ates, titos, titas, and parents. 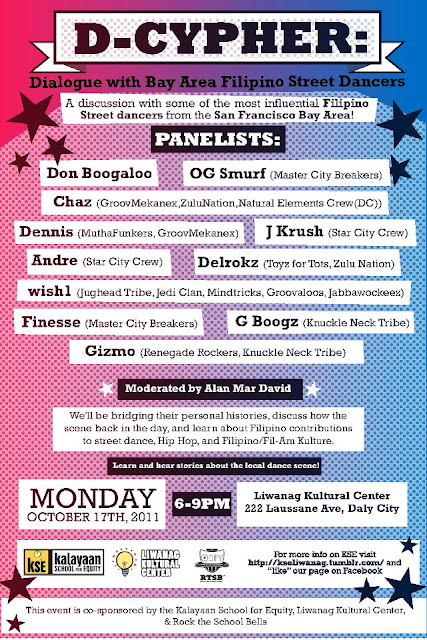 I'm hoping that these "cyphers" of knowledge will be constructive for "old school" practitioners and younger people alike so that the culture can continue building and expanding boundaries.  In addition, I hope that these sessions will avoid bashing the existing state of hip hop that young people may identify with while glorifying the "golden age" of so-and-so decade.  Whatever the case, this is a wonderful and promising start to future dialogues, hopefully in the San Francisco Bay Area and beyond!