Guest Article: Battle of the Beats is a battle for hearts 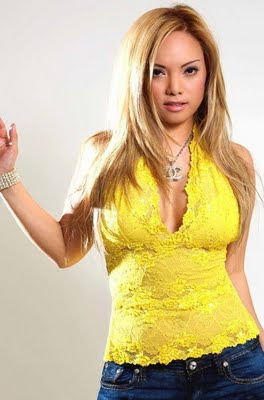 Chill aka the Queen of Hip Hop in the Philippines
and Red Alert Entertainment brings you the first ever
Battle of the Beats- Philippines
Battle of the Beats
Friday, July 15, 2011 @ 8:00pm
Teatrino in Green Hills
--
Battle of the Beats is a battle for hearts
by Megan Villanueva
“Hip hop is dead in the Philippines” is a common saying among hip hop heads here.
To Fil Ams like myself who have had the privilege of experiencing the hip hop scene in the Metro Manila, that statement proves to be false. With films like Lyrical Empire and Youtube hits like FlipTop, the world has witnessed the flourishing of hip hop in the . The nation, mostly known for their ballads and sound, has a lot of little-known quality music hiding in the "urban" scene. Upon arriving in the Philippines, when U.S.-based producer/artist Sam Rhansum heard the common saying above, he vowed to be a part of the ongoing struggle to change that perception.

Chill, the Queen of Hip Hop in the Philippines and Sam Rhansum (together with Atlanta-based producer Billy Hume) comprise Red Alert Entertainment. Red Alert has organized the Philippines' first ever of the Beats, which parallels (and in many way exceeds) beat battles in , and his event will bring a level of competition and long-awaited exposure to a multitude of talented producers of the . Representing the whole spectrum of urban music, the of the Beats will bring you electronic mixes from Funk Avy to Chrizo’s boom bap hip hop beats to show the diversity among the nation's producers. 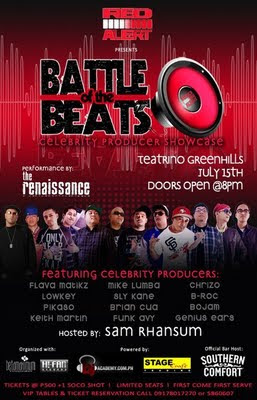 of the Beats isn’t just a showcase, it is also an attempt to bridge the unfortunate gaps that prevent unity among artists. As an ongoing program that doesn't stop at Friday's premiere at Teatrino, the event will connect talented producers with aspiring artists and emcees with fellow DJ’s to collaborate and create great music. As an ongoing series, of the Beats will become the platform for media and labels to seek quality beats and talented artists. Furthermore, the much anticipated educational component of the series sets it apart from any other beat battle program as it strives to educate amateur producers--who may lack resources and experience--in enhancing the quality of their production.

To say the least, of the Beats has burdened itself with a lot of responsibility to follow through with these goals. Although, because of the demonstrated support so far its success looks promising.

You are invited to witness the country’s top producers showcase their talents and become a part of this milestone for the industry this Friday, July 15th at Teatrino in Green Hills at 8pm. For tickets call 6334034 or 09174090509.