Ok, gotta delay diggin for youtube gems so I can plug another screening opportunity for my documentary Lyrical Empire: Hip Hop in Metro Manila at the 11th Annual San Diego Asian Film Festival.

Lyrical Empire is featured in the He(art) of the Matter SDAFF festival program this coming Sunday, October 24 at 4:45pm.

This documentary is slowly making its film festival rounds. I hope to bring it to Manila soon. Since we're in San Diego, I will not refuse any offers of carne asada fries. 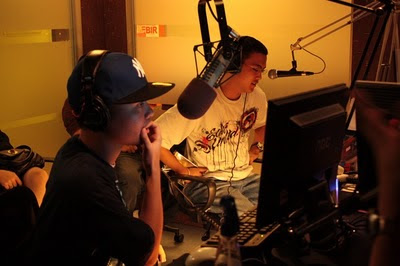 Marquiss and Chrizo for the radio heads (Photo: Bong Andres)

You can read more about my experience with a few of the Metro Manila hip hop heads in my article for Evil Monito magazine.*

Ridin’ out in Metro Manila

On a drizzly, humid July afternoon I squeeze into an overflowing train headed for Las Piñas, a city in southern Metro Manila. I hop from the train onto the Philippines’ most ubiquitous forms of transportation, the jeepney, a functioning relic of the United States military ostentatiously stylized with distinct Filipino flavor—bright paint, shiny chrome, and customized body kits. Like the other commuters, I cover my mouth and nose with a handkerchief as we battle the Metro’s pollution and traffic.

I am on my way to interview the Turbulence Productions crew, a small, independent group of emcees, beat producers, and entrepreneurs who rank as one of the most respected hip hop crews in the Philippines.

As someone who has been immersed in hip hop and who documents Filipino American involvement in the cultural cipher, I, like many other Filipino Americans, carried my own biases about hip hop in the Philippines. I believed because the Philippines is a poor country whose people are obsessed with mimicking catchy American pop songs, the quality of hip hop in the country must be sub-par.

I had it all twisted. CONTINUE READING...

---
*I meant Philippine presidential-candidate Ninoy Aquino. Thanks Eric Tandoc for the heads up.
| More
Posted by MV at 6:50 PM