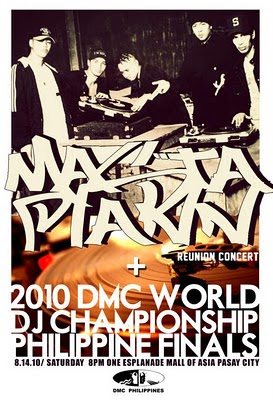 August is a month full of historic moments for Philippine hip hop. The big event happening this Saturday is the 2010 DMC World DJ Championship- Philippine Finals, featuring the MastaPlann Reunion show. Read the article below, but I have a few videos here (including one on shaved heads!!) on MastaPlann and some thoughts on their impact on Philippine hip hop. These platinum-selling artists are getting together after 15 years and going strong with new music!

Also just released is a music video that bridges the veteran generation and the up-and-coming hip hop artists in Metro Manila. Turbulence Crew and A.M.P.'s young powerhouse Marquiss combines with MastaPlann and equally important veterans the Sun Valley Crew for the song "Forget About It". You gotta love the 90's vibe many Philippine hip hop crews give homage to, Chrizo lays out a dirty, nasty beat for this one. You can cop this song on Marquiss's highly anticipated G.R.A.E. album. 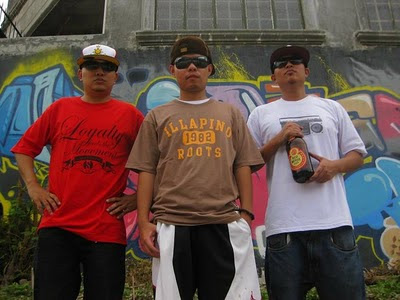 A.M.P. on the set of "Forget About It." From GRAE Area.
While on my way home to California, I borrowed a copy of the Manila Bulletin to read on the plane. I was pleasantly surprised to find an article on MastaPlann's Reunion concert (right above an ad for a Boyz II Men concert at Araneta Coliseum!). So I decided to steal the page and scan it. Click on image below to see a bigger picture. 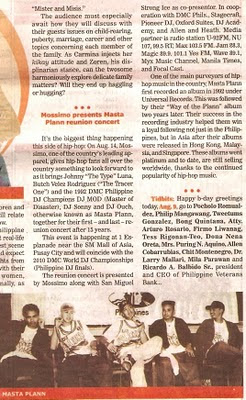 Here is the same article re-printed in the online edition of The Philippine Star. Napakasuwerte to whoever is going! Astig!

MANILA, Philippines - It’s the biggest thing happening this side of hip-hop: on Aug. 14, Saturday, 8 p.m., Mossimo, one of the country’s leading apparel gives hip-hop fans all over the country something to look forward to as it brings Johnny ‘The Type’ Luna, Butch Velez Rodriguez (‘The Tracer One’) and the 1992 DMC Philippine DJ Champions DJ MOD (Master of Disaster), DJ Sonny and DJ Ouch, otherwise known as Masta Plann, together for their first and last reunion concert after 15 years.

This event is happening at 1 Esplanade near the SM Mall of Asia, Pasay City and will coincide with the 2010 DMC World DJ Championships (Philippine DJ finals).

One of the main purveyors of hip-hop music in the country, Masta Plann first recorded an album in 1992 under Universal Records. This was followed by their Way of the Plann album two years later. Their success in the recording industry helped them win a loyal following not just in the Philippines, but in Asia after their albums were released in Hong Kong, Malaysia, Singapore, Indonesia and Japan through the efforts of their management led by Jesse Gonzales Cambosa of DMC Philippines and the late Bella Tan of Universal Records.

These albums went platinum and to date are still selling worldwide, thanks to the continued popularity of hip-hop music. For tickets inquiries, call TicketNet at 911-5555.